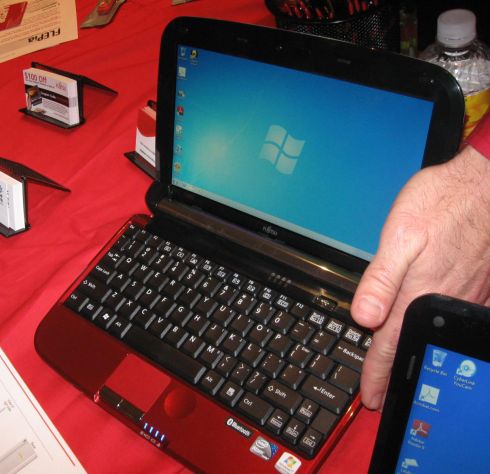 I got a chance to check out Fujitsu’s new MH380 netbook last night, as well as the company’s higher end, but smaller profile Fujitsu UH900 mini-laptop.

Fujitsu introduced the MH380 a few weeks ago. It has an Intel Atom N450 CPU, Windows 7 Starter, and a 10.1 inch, 1366 x 768 HD display. But the first thing I noticed about the laptop when I saw it in person was the incredibly tiny touchpad that’s offset by a circular indent on the right side. Basically, Fujitsu decided to scrap the traditional scrolling area of a touchpad and replace it with a dedicated scrolling section. If you want to scroll, you place a finger in the indent and swirl clockwise or counterclockwise to go up or down.

The company is also showing off the $850 Fujitsu UH900. This little guy has a 5.6 inch, 1280 x 800 pixel HD multitouch display and a 75 key keyboard that’s about 75% full sized. If you find it too small for touch-typing, you can use it as a thumb keyboard fairly easily.

If the $850 price tag seems a bit steep, it’s worth noting that the UH900 also has built-in GPS and Garmin’s GPS software, which makes it sort of two (or more) devices in one. You’d end up spending at least a few hundred dollars on a standalone GPS, and that’s included in the price here. But primarily, Fujitsu is targeting this at niche markets such as healthcare.

You can check out a video overview of these two devices after the break. There’s also a close-up shot of the Fujitsu MH380 touchpad and scrolling area. 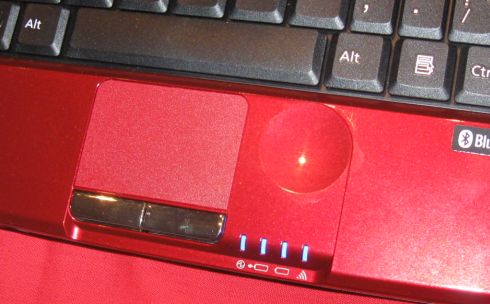