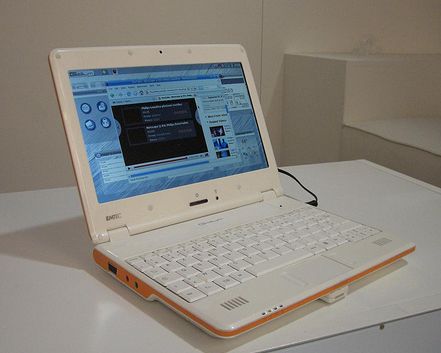 The current crop of Eee PC killers all look an awful lot like, well, Eee PCs. They have Intel Atom processors, sizeable hard drives or solid state disks, and 9 to 10 inch displays. At first glance, the Emtec Gdium looks just like all the rest. But there are two major things that set it apart. First, it uses a MIPS-based 900MHz Loongson CPU. Second, it has no hard drive or solid state disk. Instead, it comes with a 16GB USB flash disk with the operating system preinstalled. This way you can take your disk from computer to computer while keeping your OS, files, and applications intact.

Eee PC News.de’s Sascha Pallenberg got a chance to play with a pre-production unit at the iFA show this week. And he liked it. A lot. First off, the customized Mandriva operating system is a bit of a cross between the easy mode interface you’d find on an Eee PC and a typical Gnome desktop. The desktop features a program launcher on the left that gives you easy access to frequently used programs. But it’s surrounded by widgets with RSS feeds for items like news, mail, weather, and comics. There’s also a bar across the top of the screen that you can click on to access your program and settings menus and shortcuts.

In addition to foregoing onboard storage, Emtec seems to have made a few other unusual design choices. The speakers are to the right and left of the trackpad instead of under the case or on the display. That means there’s a good chance you’ll be covering them with your hands as you type. But it also probably means that the Gdium speakers will be a bit louder than the nearly silent speakers on the Asus Eee PC 1000H. The power button also seems to be on the screen, which is unconventional, but not necessarily a bad place for a power button.

Check out Sascha’s overview video after the jump.