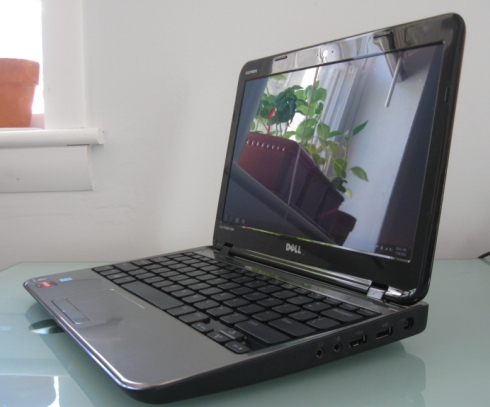 Dell sent me a demo unit to review, and you can find my unboxing video below.

But Dell has also tweaked the overall design of its thin and light laptops. While the Inspiron 11z looked like an oversized version of the Dell Inspiron Mini 10v netbook, the Inspiron M101z has a style all its own.

The new model has a nice wide touchpad with two distinct buttons for left and right clicks. It’s much easier to use than earlier models which had the buttons integrated into the touchpad. The Inspiron M101z also has a shiny, metallic looking design for palm rest and area around the island-style keyboard.

I really like the look and feel of the new laptop so far, and I plan to put it through the paces to see how it compares with other laptops in its class soon.

You can check out my unboxing video after the break. Unfortunately it came out a little darker than I had expected, but I’ve posted a couple of additional photos to give you a better idea of what the laptop looks like.