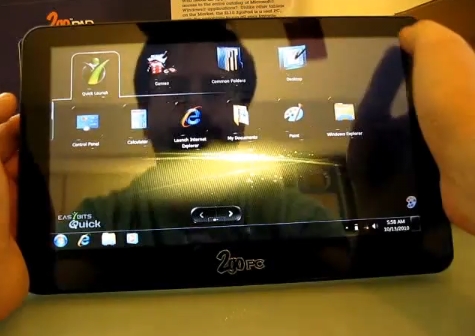 The CTL 2goPad SL10 is a 10 inch tablet with a 1.66GHz Intel Atom processor, 2GB of RAM and Windows 7 Home Premium operating system.

You also get an accelerometer, 2 channel stereo speaker, built-in mic, and a 4 cell battery which CTL says should be good for up to 5 hours.

CTL sent me a demo unit to test, and so far I have to say I’m fairly impressed. The build quality seems excellent, and you don’t realize how handy an accelerometer is until you try rotating the display on a tablet that doesn’t have one. The 2goPad also has EasyBits Quick software preloaded, which is a bit easier to use when launching frequently used applications a bit easier than the Windows 7 Start Menu. On the other hand, some of the animation effects seem a bit sluggish, which I blame on the Atom N450 processor and Intel GMA 3150 graphics.

There are a couple of capacitive buttons built into the right side of the screen bezel which let you adjust the volume, click “OK,” and launch a “Notebook Manager” app which lets you quickly toggle the WiFi, Bluetooth, and camera or adjust the volume and brightness settings.

At 2.6 pounds, the 2oPad SL10 is also kind of heavy. While that’ s a pretty typical weight for a netbook, the 2goPad doesn’t have a keyboard and is meant to be held in your hands. It’s definitely much heavier than the average paperback book, although I suppose its light compared to some hardcover textbooks I’ve seen.

The company also plans to introduce a Windows 7 tablet with an 11.6″ display and a 7 inch Android tablet early next year.

I’ll have more information the 2goPad SL10 after I’ve had a little more time to test it, but for now you can check out my unboxing and first look video after the break.