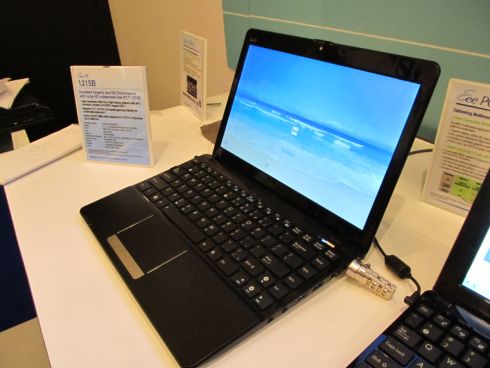 Asus hasn’t made any official announcements regarding its first laptop to feature an AMD Zacate processor, but the company did put one out on display at its CES suite this week. The Asus Eee PC 1215B looks a lot like other 1215-series notebooks from the Asus, but on the inside it packs a 1.6GHz AMD E-350 dul core processor and AMD Radeon graphics.

The laptop will comes in black, silver, or red, but the only model at the show was black.

Like other Asus notebooks, the demo model featured a number of Asus apps including the Super Hybrid Engine for underclocking and overclocking the processor. I’ll be interested in seeing how well this works with the new AMD E-350 chip.

Asus also placed a placard near the notebook display showing how the AMD E-350 Zacate and C-30 single-core Ontario chips compare with Atom chips in benchmarks. The Zacate scored almost twice as high as an Atom N550 dual core chip in PCMark05 and wiped the floor in the 3DMark06 test with a score of over 2300, compared with 154 for the N550.

There’s no word on the release date or price for this model yet.