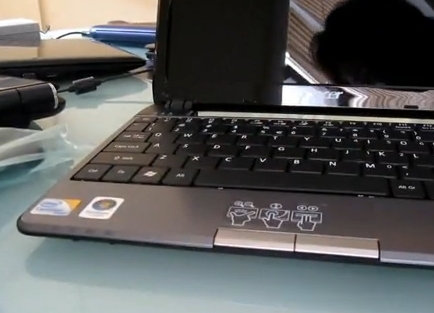 The Dell Inspiron Mini 10v wasn’t the only laptop to show up at Liliputing HQ today. The folks at B&H Photo and Video were kind enough to send me an Acer Aspire 1410 laptop to review for the next week or two.

You can check out my unboxing video after the break. It also includes a brief comparison with the Asus Eee PC 1101HA, which is about the same size. But while the 1101HA has a 1.33GHz Intel Atom Z520 processor and GMA 500 graphics, the Acer notebook packs a 1.4GHz Intel Core 2 Solo SU3500 CULV processor and GMA 4500MHD graphics.

The first thing I wanted to know about the Acer laptop was whether it can handle full-screen Flash video from Hulu. I have yet to find an Intel Atom powered computer with a screen resolution higher than 1024 x 600 pixels that can play video from Hulu in full screen mode without getting choppy. Unfortunately, despite the faster processor, the Acer Aspire 1410 has the same problem. Hulu video looks great in windowed mode, but gets choppy when you blow it up to full screen.

The netbook does have an HDMI output and should be able to handle HD video playback from the hard drive, but I haven’t put that to the test yet. Windows Vista also appears to be a bit of a resource hog on this system. It’s possible it might run better with Windows XP or Windows 7. But since no restore discs were shipped with the computer, I’m probably not going to try changing the OS since I have to send the Aspire 1410 back within a few weeks. That means any tests I run will likely be in Windows Vista, although I might try popping in an Ubuntu LiveUSB stick at some point.

Update: Following the advice listed in the comments, I tried installing Google Chrome and playing Hulu in full screen mode. It made no difference. But then I installed Windows 7 RC, which is much lighter on system resources than Windows Vista and had much better luck with Hulu. Using Internet Explorer, Hulu was still choppy. I haven’t tried Firefox yet, but Hulu plays back perfectly in full screen mode when using Google Chrome. Going forward, I’ll be testing the computer with both Windows 7 and Windows Vista, since anyone who buys the Acer Aspire 1410 in the next few months is likely to get it with Vista preinstalled.