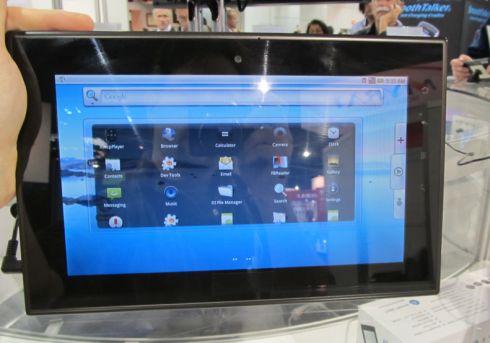 As expected, Stream TV Networks has begun showing off a whole slew of new 7 and 10 inch Android tablets at CES. And as expected, most of the new models are slight variations on a theme.

First up, in the 7 inch space we have the eLocity A71, A72, and A73. These models look almost exactly like the eLocity A7 which is is already available for purchase. But the new models have more storage space, a higher resolution screen, and will run Google Android 2.3 Gingerbread instead of Froyo.

Stream TV also says the new models have true multitouch screens, while the original A7 had a capacitive display which offered pinch to zoom, but not much more.

The company is also showing off a line of 10 inch models, which have high resolution 1366 x 768 pixel capacitive touch screen IPS displays and NVIDIA Tegra 2 processors. These models are designed to run Google Android 3.0 Gingerbread… which means they probably won’t be available until this spring.