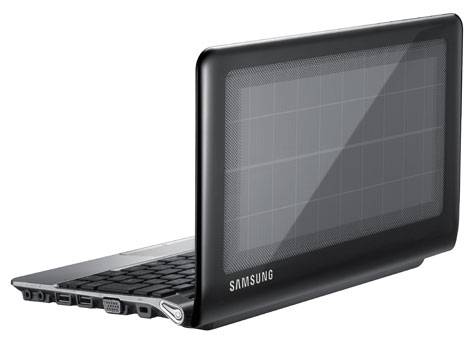 Samsung announced plans to launch a solar-powered netbook last month at the company’s Africa Forum. Now the folks at Samsung Hub report that the Samsung NC215S solar netbook will also make an appearance in Russia — and they dug up some of the first pictures of the new netbook.

The new netbook features a solar panel on the lid which Samsung says will give you an hour of run time for every two hours of charging time. Fully charged, the netbook is supposed to run for up to 14 hours.

Aside from the solar panel, the netbook looks almost identical to the Samsung NC210 mini-laptop. It has a 10.1 inch, 1024 x 600 pixel matte display, 1GB of RAM, and a choice of an Intel Atom N455 single core of Atom N570 dual core processor.

Update: Samsung has confirmed that the netbook is coming to the US the week of July 3rd for $399.