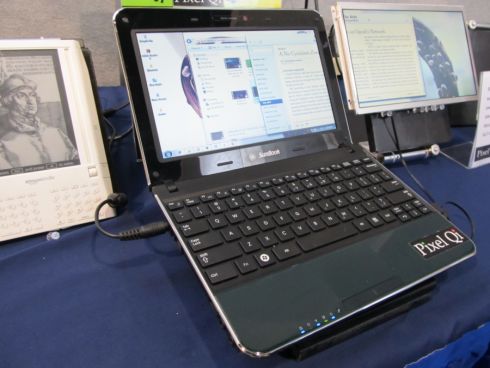 Pixel Qi has begun showing off its new 7 inch display based on the same technology used in the company’s low power 10.1 inch screen. Pixel Qi’s displays can function both as full color LCD screens and as high contrast, grayscale displays which are viewable without a backlight by relying on ambient lighting — much like an E Ink display. The difference is that while E Ink screens have slow refresh rates, a Pixel Qi display can handle full motion video whether the screen is in color or grayscale mode. The only difference is whether the backlight is on or off.

Turning off the backlight not only makes a netbook, tablet, or other device with a Pixel Qi screen readable in direct sunlight — it also drastically reduces the amount of power used by the display — which is often one of the most power-hungry components of a computer.

The new, smaller display has the same 1024 x 600 pixel resolution as the 10 inch model. Pixel Qi has also improved the viewing angles — although they’re still not great. With the backlight off, you can view the screen from pretty wide angles. But in full color mode, the colors start to wash out pretty quickly when you view the screen from the side, which is a bigger problem with tablets than netbooks. 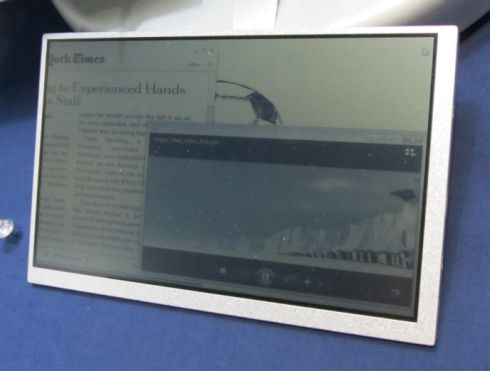 Pixel Qi is also showing a new reference design for a controller that can automatically adjust the screen brightness to improve the battery life of devices with the company’s displays with little to no user intervention.

The first consumer product expected to ship with Pixel Qi’s 10 inch display is the Notion Ink Adam tablet, which is set to start shipping to customers next week. But Pixel Qi is finally starting to show some of the other products that will soon ship with its displays, including another tablet and two netbooks — all of which are set to launch in the first quarter of 2010. 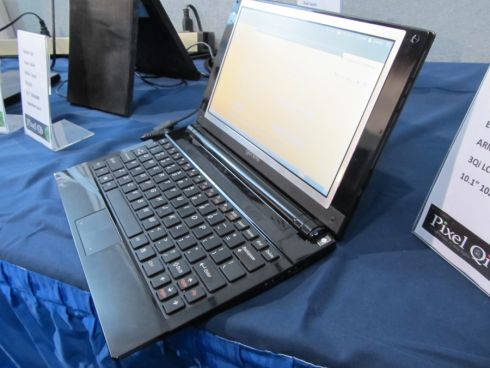 Two of the most interesting products are a netbook from Genesi with an ARM-based processor and Linux-based operating system, which should get excellent battery life with the backlight turned off, and a Windows netbook from Clover Systems called the SunBook.

Pixel Qi has been showing off netbooks retrofitted with its screens for well over a year. But unlike those Lenovo computers, the SunBook is actually designed for the Pixel QI screen and even included a special Fn key for turning off the backlight with a keystroke.

The netbook has an Intel Atom N450 CPU, and Clover Systems says it gets between 8 and 12 hours of battery life and runs Windows 7 Starter. 3G and 4G wireless options will also be available.

Unfortunately, while the SunBook will be one of the first Windows 7 netbooks to ship with a Pixel Qi screen, it will come at a premium price. The company will charge $865 for the netbook. 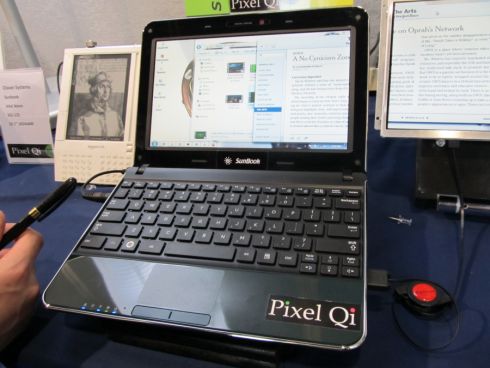 That’s likely because the company is buying low volumes of the displays. Pixel Qi founder Mary Lou Jepsen told me that Clover Systems actually started the SunBook project by purchasing some of the $275 DIY screen kits from the Maker Shed and Pixel Qi didn’t even find out about the netbook until later. Companies like Notion Ink which purchase larger quantities will be able to negotiate much better pricing.

Jepsen says the company hasn’t decided whether to offer its new 7 inch displays through the Maker Shed or not, but she’d like to make it possible for DIY enthusiasts to buy the new screens.

Pixel Qi has also confirmed that the company is working on several new screen sizes and resolutions, including an upcoming 9.7 inch display for one client (which Jepsen wouldn’t name), and a new 10.1 inch screen with a higher resolution 1280 x 800 pixel display.