Samsung and Motorola are both expected to release new smartatches soon. The Samsung Gear S2 will run Tizen-based software and feature a round display, while the next-gen Motorola Moto 360 is expected to look a lot like last year’s model, but it will come in two sizes and feature lugs that make it easier to switch watchbands.

Now we’ve got a better idea of what the watches will look like.

Samsung’s Dennis Miloseki posted a picture of the Gear S2 on Instagram this week, giving us the best look at the watch so far.

As expected, it features a round design, a metal exterior, and a digital watch face that looks awful lot like an analog watch face… at least in the right light.

Samsung has also posted a video that gives us an idea of what to expect from the first Tizen watch with a round face.

The new Motorola Moto 360 watches have larger, external lugs which should make it easier to attach your choice of band to the watch.

Previously leaked details suggest there will be a Moto 360S and a Moto 360L, and now HelloMotoHK has posted a picture of a first-gen Moto 360 next to the new small model. 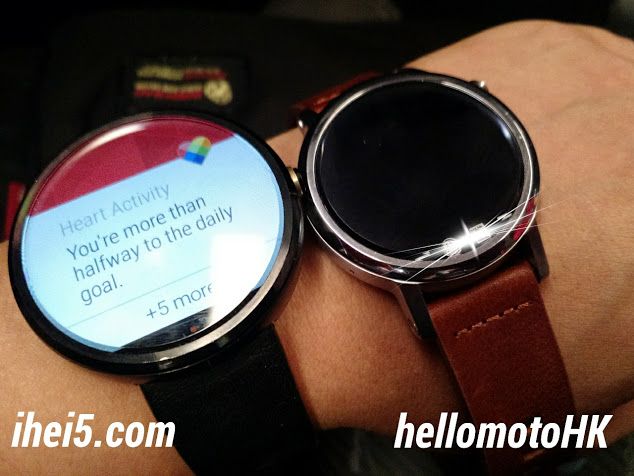 As expected, the crown has been moved higher on the device, and the “flat tire” is still at the bottom of the watch, which means a small portion of the circular display will show a black bar when the screen is on.

Still, if you’ve been holding out for an Android Wear watch with a small screen, it looks like one is on the way.

Update: Droid Life has also found a picture of the larger Moto 360L… it looks pretty much like the small model, but bigger.

4 replies on “First look at new smartwatches from Samsung, Motorola”