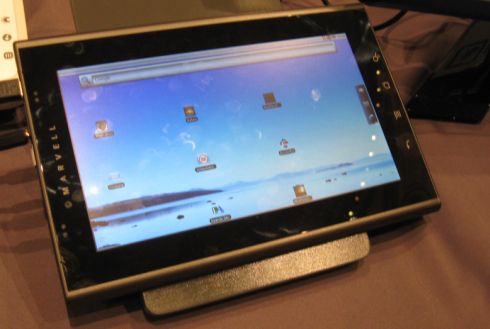 Chip maker Marvell is starting to show off a rather exciting reference design for an Android tablet. Powered by a Marvell Armada 600 chip, the tablet has a 10 inch, 1280 x 720 pixel HD display and support for 1080p HD video playback and 3D graphics acceleration.

I got a chance to check out a prototype this evening, and I was pretty impressed. While Google Android 2.2 doesn’t officially support screen resolutions this high, Marvell tweaked the operating system to play well with the HD display and most apps seem to work pretty well. In the demo video after the break, you can see what Angry Birds looks like on a 720p screen.

The hardware isn’t completely finalized yet, because Marvell doesn’t actually produce computers, just chips. But the company says we should expect to see at least one tablet based on the reference design at CES in January. It will likely have the same HD display, or possibly even a higher resolution screen — although it’s up to the manufacturers to decide what type of touchscreen technology (resistive, capacitive, etc) to use.

The prototype I checked out seemed very zippy and responsive and had no problem displaying HD video simultaneously on its own screen and an external display through an HDMI connection.

This is definitely one to keep an eye on. Things will probably get even more interesting after Google releases an updated version of Android which supports larger screen resolutions. Personally I’m just hoping we start to see a virtual keyboard that makes more sense on Android tablets with 10 inch screens.

You can check out my hands-on video and some more photos after the break.