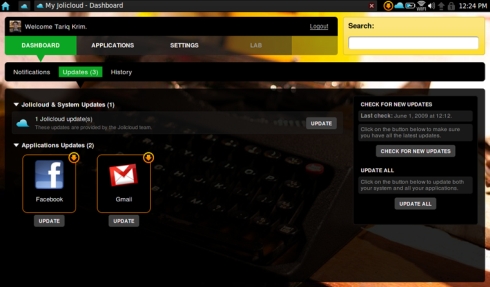 I finally got my hands on an early build of the Jolicloud operating system and took it for a spin on my Asus Eee PC 1000H. In a nutshell, Jolicloud is designed to blur the distinction between web apps and desktop apps while adding a social element to your computer desktop. You can watch my short video overview of the operating system after the page break.

Jolicloud is based on Ubuntu, which means it can run any desktop app that works with Ubuntu, including OpenOffice.org, GIMP, and Pidgin. But you can also “install” web applications like Zoho Sheet, Meebo, or Twitter. Basically, what happens under the hood when you install one of these apps it that Jolicloud uses Mozilla Prism to create a shortcut to the app in your program launcher, and when you launch the application, a single-window version of Firefox loads giving you quick access to your web apps.The end result is that you can load Twitter or Facebook just as easily as launching any desktop app.

The operating system also includes a social layer that lets you subscribe to feeds from other users or groups. For example, if you decided to follow me on Jolicloud, you’d be able to keep track of which applications I install, who I’m following, and other data that’s shared over the network.

The operating system is still in the early Alpha stages and the developers are working out the kinks. When I loaded the OS on an Asus Eee PC 1000H, Jolicloud failed to detect my wireless card and I had problems installing applications at first. But Jolicloud founder Tariq Krim was able to help me troubleshoot those issues. By the time the OS is released to the public, these kinks should be worked out.

Krim is in touch with several device makers about the possibility of bundling Jolicloud with their hardware. But the operating system is also designed to work on a number of existing netbooks from Acer, Asus, HP, Dell, Lenovo, MSI, Samsung, and Intel. In other words, once it’s more widely available you’ll be able to pick up any old Intel Atom netbook and customize it with a downloaded copy of Jolicloud.

Jolicloud is starting to send out invitations to some users now. If you want to try the operating system yourself, you can sign up for an invite now, but it might be a little while before you receive a code.