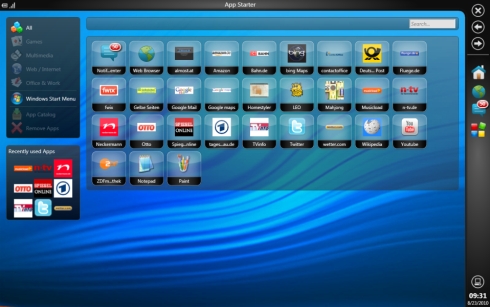 Mirabyte FrontFace is a custom user interface designed to run on top of Windows to make the operating system easier to use on touchscreen tablets. While Windows 7 includes built in support for some touchscreen gestures, FrontFace goes a few extra steps by giving you big, touch-friendly icons for launching and switching applications.

FrontFace also includes some of its own apps, including a notification center, a feed reader, and eventually FrontFace will include native photo, music, and video apps. You can switch between apps using the big arrow keys in the top right corner. And interestingly, while the FrontFace web browser doesn’t support tabs in the traditional sense, you can open multiple browser windows and flip between them using these arrow keys as well. You can also close any app by hitting the X button in the top right corner.

The folks at Mirabyte let me take a pre-release version of FrontFace for a test drive. Some of the functionality isn’t available yet (for instance, there are some non-functional demo widgets, but support for actual widgets hasn’t been added yet. But the overall UI is clean and simple, and I can see how it would make the experience of using a Windows tablet a bit more iPad-like.

What I’m still unclear on is whether people want Windows tablets to be more iPad-like. I suppose you still get the advantage of being able to run Windows apps when you’re using Mirabyte. But when you force all apps to launch in full-screen mode and replace the desktop, start menu, taskbar, and other Windows UI elements, it feels a bit like you’re losing some of the customizablity that makes Windows stand out.

On the other hand, I suppose if you really want a touch-friendly UI for launching apps — if not necessarily running them, FrontFace is about as good as any I’ve seen. Individual apps retain their typical layout, which means you can run Microsoft Office 2010 if you like, with the familiar ribbon user interface at the top — the only things that would be missing would be the usual close, minimize, and maximize buttons. Or if Office 2003 or OpenOffice.org are more your taste, you can install those too. The key advantage FrontFace has over the Apple iOS user interface is that it is simply covering up the default Windows desktop and application menus. If that’s the sort of thing you want in a tablet.

You can check out some more screenshots of a pre-release version of FrontFace after the break, as well as a video overview courtesy of the folks at Mirabyte.

7 replies on “First look at FrontFace UI for Windows tablets”