The G-Box Dyno is tiny desktop computer that sits in the palm of your hand. It’s got the guts of an Android smartphone or tablet, but it doesn’t have a display or touchscreen. Instead you plug in a keyboard, mouse, remote control, and TV or monitor to run Android apps on a big screen.

At first glance the G-Box Dyno looks nearly identical to the MK802 Android 4.0 Mini PC that was released earlier this year. But the Dyno has a faster processor, better ventilation, and comes with a remote control. And it sells for just $69 (or less).

The folks at Android TV Box sent me a unit to review. Here are some initial impressions.

The PC-on-a-stick features an Amlogic AML8726 ARM Cortex-A9 single core processor. That’s the same chip used in Diamond Multimedia AMP1000, although the G-Box Dyno costs sells for just over half the price of that media player.

The mini PC comes with an HDMI cable, power cable, and an infrared remote control which you can use to navigate through the Android user interface even if you don’t plug in a keyboard or mouse.

The remote has arrow buttons, volume keys, an OK/select button, and Android keys for basic functions including home, back, zoom, and opening the app drawer. 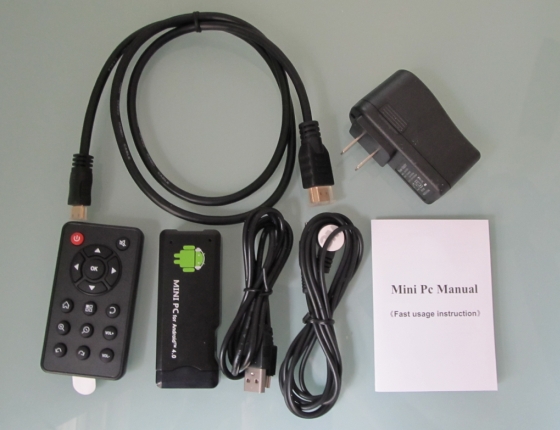 The G-Box Dyno comes with Android 4.0 Ice Cream Sandwich and ships with a custom app launcher which bears a more-than-passing resemblance to Microsoft Bob. It offers quick and not particularly intuitive shortcuts to the web browser, media apps, file browser, and settings.

Unlike some Android mini PCs I’ve seen recently, the G-Box Dyno does not come pre-rooted, so if you want root access to files, folders, and settings, you’ll need to find a way to root the device yourself.

Fortunately the device also includes a more standard Android launcher app if you want to customize the home screen with the app icons and widgets that you use most often. You can also download and install third party app launchers from the Google Play Store, because the Dyno comes with Google’s app store preloaded.

The Amlogic processor is significantly faster than the Allwinner A10 ARM Cortex-A8 chip in the MK802, and the new device feels much more responsive than that little computer.

It probably also helps that the Dyno also has 1GB of RAM, while the MK802 on my desk has just 512MB (I bought it before 1GB models were available). 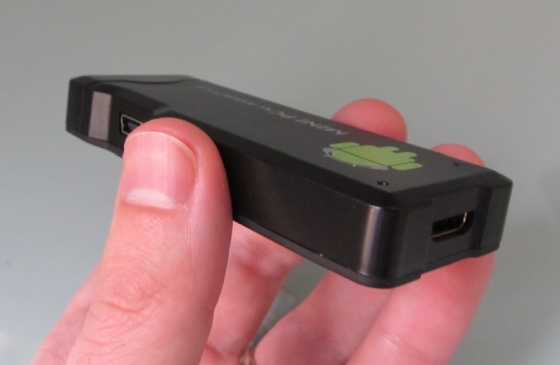 On the other hand, while I’ve never had problems picking up a WiFi signal on the MK802, the G-Box Dyno is a little more finicky. My router is in the first floor of our house, while my office is on the third floor. Sometimes the Dyno noticed the router, sometimes it didn’t. In order to get online, I had to enable the mobile hotspot feature on my phone to share my 3G connection.

While you can use the Dyno as a little Android powered computer, it’s designed to be used as a TV companion. It comes with a pre-release version of the XBMC media center application for Android. The user interface is pretty snappy, and it can handle video playback reasonably well.

I wasn’t able to get the Netflix app from the Google Play Store to function at all, but I had more luck once I installed Diamond Multimedia’s build for the AMP1000 media player. The user interface is very sluggish, but once videos start playing they look fine.

The official YouTube app force closed whenever I tried to open it.

I’ll be trying out more apps on the G-Box Dyno in the coming weeks, and keeping an eye out for third party development. I’m interested to see if anyone manages to get Ubuntu or other Linux-based operating systems up and running on this type of hardware.

But despite the goofy custom app launcher and mediocre WiFi performance, I could certainly think of worse ways to spend $69. The G-Box Dyno certainly isn’t the best little internet TV box money could buy, but for the price it’d be tough to find one that’s quite this versatile.