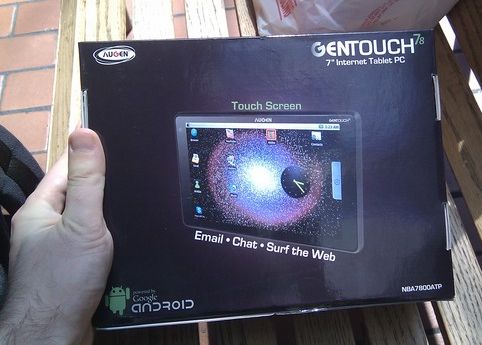 The Augen GenTouch78 tablet has been getting a lot of attention for the past few days. That’s not because this cheap Android tablet is the fastest, highest resolution, or most powerful iPad competitor to hit the streets. It’s for two reasons: It’s cheap. And it’s available in stores in the US.

I stopped by a KMart in Philadelphia this morning just about 20 minutes after they had received a small shipment of the new tablets from Augen. In a few days KMart will regularly stock the tablet for $169.99, but if you pick one up by Saturday (or get a raincheck), you can grab one for $149.99 plus tax. Mine cost about $162.

I haven’t had time to thoroughly test the tablet yet, but while it’s made of plastic, it feels nice and sturdy. It has dedicated buttons for all of your usual Android functions, including back, search, home, and menu — but they’re located on the back of the tablet. I have a feeling you’ll be able to press them by feel after using the GenTouch78 for a few minutes. But I was caught off guard by it at first, as you can see in my unboxing and first impressions video (shot one-handed while using a cellphone), after the break.

The tablet does indeed run Google Android 2.1, and you’re greeted by a live wallpaper on the home screen when you first boot the device. And much to my surprise, there’s an Android Market button on the home screen — although it reportedly doesn’t work properly just yet.

The included plastic stylus feels very cheap — but it definitely comes in handy, since the resistive touchscreen responds better to stylus (or fingernail) input than fingertips.

I’ll have more details once I have a chance to spend some more time with the Augen GenTouch78, but I wanted to share some quick impressions right away. You can check out my video after the break.

Update: I’ve also uploaded a first look at the user interface with a closer look at the software and touchscreen responsiveness. The short version? It’s a mixed bag.

22 replies on “First impressions of the Augen GenTouch78 Android tablet”