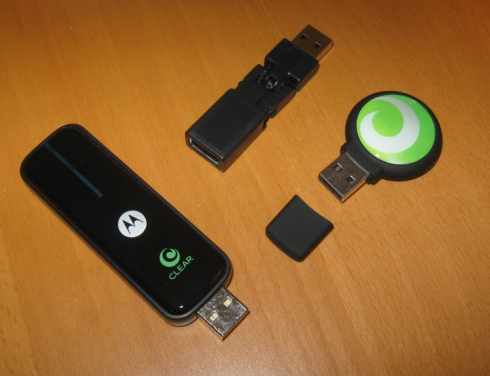 After checking out the CLEAR launch event in Philly last week I decided to give the WiMAX service a try and I signed up for a $50 for life plan that gives you both a USB modem for mobile use and and a home modem that you can hook up to a WiFi router to run a home network. That’s just a few bucks a month more than I’m paying right now for Verizon DSL, and it gives me the freedom of roaming around the city of Philadelphia with my WiMAX modem and a netbook. The service is also available in about two dozen other cities around the country, including Las Vegas where I’ll be spending about a week for the Consumer Electronics Show in January.

My CLEAR hardware arrived today, and it’s pretty no-frills stuff. The USB modem is fairly small, but if you don’t like the way it sticks out from your computer, you can use an included adapter to angle the modem so it shoots upward or runs along the side of your laptop.

The home modem is much easier to use. You just plug it in, insert an Ethernet cable and run the cable to your PC or a WiFi router. That’s it. You should be online in a few seconds.

That’s the good news. The bad news is that the CLEAR modems are pretty sensitive to location. I’ve been both the USB modem and the home modem in my office for the past 45 minutes or so, and my internet connection has already dropped out once. My upload and download speeds have been averaging somewhere in the 3-4MB/s down and 0.2-0.4MB/s up ranges. That’s significantly short of the 6MB/s down and 1MB/s upload speeds CLEAR promises.

But after wandering around the house a bit, I discovered that it’s a completely different story on the other side of the house where I get close to the advertised speed. What’s the difference? From my office window I have a nice view of the three-story building across the street. On the other end of the house, there are no tall buildings blocking our view. I’ll probably wind up sticking the home modem in the third floor window on that side of the house and plugging in a WiFi router.

If things don’t work out, I have two options.

You can check out some photos I took while I was ripping open the boxes this afternoon in the gallery below.