Google Android lets you customize your device with widgets, third-party app launchers, keyboards, and other tools. But up until a few years ago if you wanted to make deep system-level changes to the way your device works, you’d typically needed to install a custom ROM such as CyanogenMod or Paranoid Android, which are basically complete replacements for the version of Android that your device came with.

Then along came the Xposed framework from a developer that goes by the name of rovo89. Xposed lets you install modules that let you optimize your phone or tablet’s battery life or performance, change the quick settings or power menu panels, block calls from certain phone numbers, tweak the Android Status Bar, and more.

In other words, it let you bring features that had previously only been available in custom ROMs to your device without replacing your operating system. 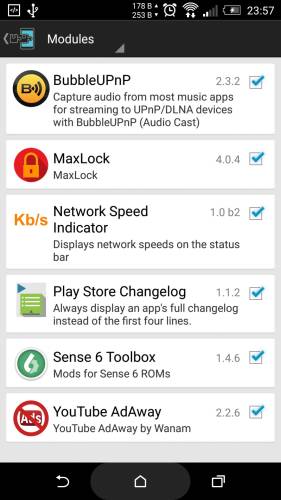 Rovo89 has released an alpha version of the Xposed Framework for Android 5.0. If you have supported hardware, most things should work out of the box, but it’s being released as an alpha as a sort of warning: if you’re not interested in running software that’s only been extensively tested on a few devices, you might want to wait until more people have kicked the tires and checked for bugs first.

At this point Xposed for Android 5.0 requires an ARMv7 processors which means it won’t work on phones or tablets with Intel or ARMv8 64-bit chips. But rovo89 promises a 64-bit build will be available soon.

He also warns that it can cause boot looks on stock Samsung ROMs. Most importantly, you should keep in mind that it takes a few more steps to install Xposed on Android 5.0 than it did on Android 4.4 and earlier.

First, you’ll need to flash a zip file using a custom recovery such as ClockworkMod or TWRP. that will install the framework, which includes a modified version of Google’s ART runtime. Then you’ll need to install an Xposed APK which gives you a program that you can use to manage Xposed modules on your device.

Note that it’s probably a good idea to backup your device first: the simplest way to uninstall Xposed if you have any problems is to restore a nandroid backup.

While rovo89 says most modules designed for earlier versions of Xposed should work without any changes, some developers might need to tweak their software to work with Lollipop.

Users have already reported that some modules such as Greenify, Xprivacy, or Amplify aren’t currently working, and some popular modules such as GravityBox are only partially working for now. But now that there’s a version of Xposed that supports Android 5.0, there’s incentive for the developers of those modules to update their software to work as well.

One reply on “First build of Xposed Framework for Android 5.0 Lollipop now available”