Rockchip’s RK3188 chip is a quad-core ARM Cortex-A9 processor with top speeds of up to 1.8 GHz and Mali 400 quad-core graphics for HD and 3D video. Chinese tablet makers have already started releasing products based on the new chip, and now the first Android TV boxes with RK3188 processors are starting to arrive as well.

Like earlier Android TV sticks, these new models are about the size and shape of a chunky USB flash drive. But they’re actually tiny computers that run Google Android. Plug them into your TV and you can run Android apps on the big screen.

GeekBuying is selling a model called the Tronsmart T428 for $99. You can read more about this model at the GeekBuying blog.

In a nutshell, it features an RK3188 processor, Mali 400 graphics, 2GB of RAM, 8GB to 16GB of storage, built-in 802.11n WiFi, a microSD card slot, USB 2.0 port, and microUSB port. There’s an HDMI connector on one end, which lets you plug the stick directly into a TV or monitor.

The Tronsmart T428 is so new it doesn’t even have a case — GeekBuying is currently showing the device as an uncovered circuit board.

The device runs Android 4.1 Jelly Bean, but there are plans to offer an Android 4.2 update soon.

GeekBuying reports that the device scores very well on benchmarks — it gets a 18706 score in AnTutu, which is higher than the scores you get from most devices with NVIDIA Tegra 3 or Samsung Exynos 4412 processors.

Chinese company CloudnetGo is offering a stick with nearly identical specifications called the CR9. The only major difference I can spot right now is that the CloudnetGo CR9 comes with a case… and I’m not sure it’s available for purchase yet. 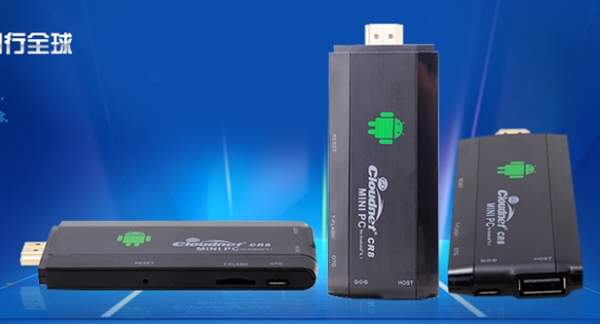