Sometimes a picture is worth a thousand words… and a video is worth a few thousand more. If you’re trying to sell fireworks, you’re selling a box of sticks with the promise that they’ll blow up in interesting ways. A picture on the box sort of shows what you’re really buying, but a video does a better job.

So the folks at fireworks retailer Phantom Fireworks decided to invest in tools that would let sales associates show customers videos of their products in action. Tablets work better than televisions because they’re easier to carry around the showroom and you can switch between videos more easily. 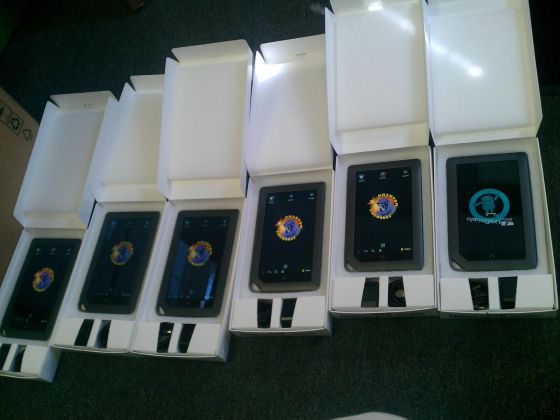 OK, nothing all that unusual so far. But here’s where the story takes a turn for the unusual.

Instead of buying an off-the-shelf solution, the company bought 300 refurbished NOOK Color tablets and flashed them with a customized version of CyanogenMod.

The company probably paid somewhere between $100 and $169 a tablet (the actual pricing hasn’t been disclosed, but B&N makes a habit of discounting the NOOK Color.

For that price, Phantom Fireworks picked up 300 devices with 1024 x 600 pixel displays, 800 MHz processors, long battery life, screens with wide viewing angles, and decent support for video playback. The company pretty much locked down everything but the video player, screen brightness, and calculator on the tablets to save battery life and allow sales reps to resist the urge to play games when they should be working.

But it’s pretty cool that the company was able to find an existing, inexpensive tablet with the hardware that met its needs — and replace the default Android-based operating system with a custom software stack that met its needs, thanks to the open source CyanogenMod version of Android.