Amazon’s Fire TV products make it easy to stream videos from Amazon, Netflix, Hulu, YouTube, and other sources to your TV. You can also install many third-party apps and games available from the Amazon Appstore.

Want to install an app that’s not in Amazon’s store? No problem. The Fire TV and Fire TV Stick run Android, and it’s relatively easy to sideload Android apps such as Kodi media center.

Actually launching sideloaded apps can be a bit of a pain though, because icons for those apps won’t be added to the home screen.

But it turns out there’s an app for that: FireStarter is a replacement for the Amazon Fire TV home screen, and it’ll show all the apps installed on your device, including those you’ve sideloaded. 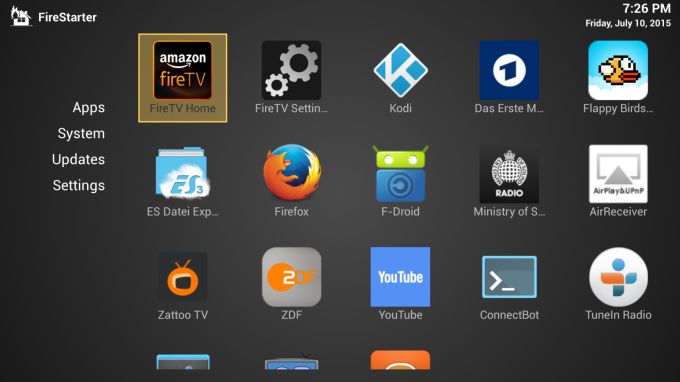 FireStarter isn’t the first home screen replacement for Fire TV devices, but it’s one of the first that doesn’t require you to root your device. That’s because it doesn’t actually replace your home screen… instead it waits for you to press the home button on your remote, and then shortly after the official Fire TV home screen launches, FireStarter launches.

That means you’ll see the Amazon user interface flash on the screen for a second, but it’ll quickly be covered by FireStarter. You can then use FireStarter to launch Kodi or other sideloaded apps.

Want to get to the official home screen? Just choose the Fire TV Home icon from the FireStarter menu.

This is all a lot simpler than the other way to launch sideloaded apps: navigate to the Settings menu, then go to APplications, choose “Manage All Installed applications,” locate the app you want to open, select it and then choose the “Launch application” option.

There’s just one problem: FireStarter might not work much longer.

Amazon is getting ready to update the operating system that runs on the Fire TV and Fire TV Stick from Fire OS 3 to Fire OS 5. A developer preview is already available, and while the new version doesn’t look any different, under the hood it includes new APIs and a bump from Android 4.2 to Android 5.1.

Some users have also noticed that FireStarter doesn’t work with Fire OS 5.

It’s possible that the developer will be able to update the app by the time Fire OS rolls out to the public. But it’s also possible that Amazon doesn’t really want this sort of app to work, and the company might have intentionally included code in Fire OS 5 that blocks apps from acting as home screen replacements. Or maybe it’s just a coincidence: part of the reason companies release developer previews is to give app makers time to update apps that might not work with the latest version of an operating system.