One of the features that’s helped set Firefox apart from other web browsers including Chrome and Internet Explorer is just how customizable Mozilla’s web browser is. Don’t like the way it looks? You can change arrangement of the buttons and search bar. Want to go further? You can install a theme to change the look and feel of the web browser.

There are two types of themes: light-weight Background Themes that affect colors and images and heavier-duty  Complete Themes that can change the layout of browser tools, the size of icons, the placement of browser tabs, and more.

Now Mozilla is planning to kill support for Complete themes though, which means future versions of Firefox may be no more customizable than Google Chrome or other browsers. 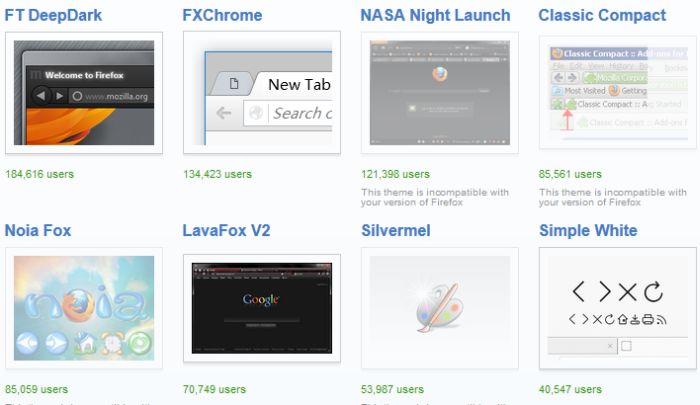 Mozilla’s Benjamin Smedberg unveiled plans to kill support for Complete themes in a recent post at the Mozilla bug tracker. The move comes as part of a Great or Dead initiative which has Mozilla developers focusing on features that are “polished, functional, and a joy to use.” For some projects that means getting the code up to snuff. For others it means killing the code altogether.

The end result should be a browser that does fewer things, but does them better. But many folks have posted follow-up messages in the bug tracker are expressing disappointment with the decision to kill support for Complete Themes.

This might not be the end of the story though. While Mozilla does plan to end support for Complete Themes as they now exist, developers are leaving open the possibility of adding new functionality to Background Themes which could make them a little more like Complete Themes, but hopefully able to run while demanding fewer resources from your computer.

11 replies on “Firefox to lose support for Complete Themes”