Mozilla took the wraps off a new experimental add-on for Firefox this week. It’s called Firefox Private Network and it’s not just experimental in the software testing sense. It’s also an experiment in revenue generation. 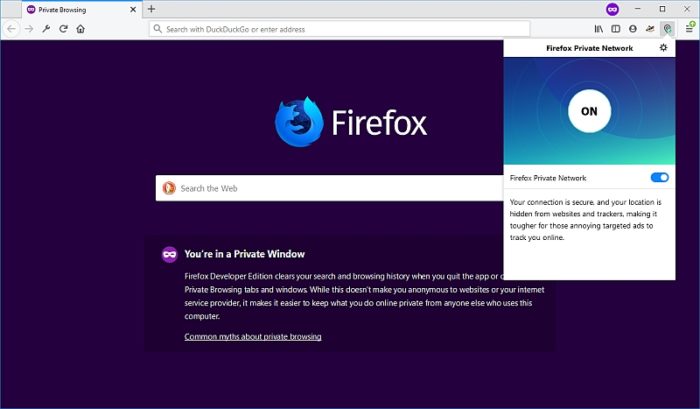 The add-on itself is fairly self-explanatory. Turn it on, and Firefox Private Network encrypts and routes your browsing activity through a secure proxy. That proxy is operated by Cloudflare — whose global reach ensures fast, reliable connections.

Firefox Private Network couldn’t be any easier to use. When you need to put your browser’s shields up, two clicks is all it takes and you’re protected from network eavesdroppers and invasive advertisements and trackers.

While it doesn’t offer the system-wide protection of a VPN, Firefox Private Network is definitely convenient. For a lot of users, its browser-only protection may be enough.

The big question is whether users will think Firefox Private Network is worth paying for.

VPNs have grown into a $10-20 billion industry and there’s still room for Mozilla to get in on the action. Most of the companies offering VPN services don’t have the kind of brand recognition Firefox does. Mozilla also ranks consistently among the most trusted Internet companies, and trust is a pretty big deal when you’re talking about a service that’s designed to safeguard your privacy.

Despite losing ground to Google Chrome, Firefox still boasts a user base of more than 260 million. Convincing a few million of those users to sign up for Firefox Private Network for a couple bucks a month would generate some much-needed, non-Google revenue.

Historically, the lion’s share of Mozilla’s revenue has come from search engine deals. The first rumblings of a freemium model for Firefox started back in 2017 when  CEO Chris Beard assured “there’d be a free level always, but also some premium services offering.”

Earlier this year senior VP of Firefox Dave Camp reiterated to software blog Ghacks, “we[…]recognize that there are consumers who want access to premium offerings, and we can serve those users too without compromising the development and reach of the existing products and services that Firefox users know and love.”

Firefox Private Network is currently in beta. You can try it out now by installing the add-on (Firefox browser required, naturally)… or possibly later this year in Firefox Premium.