Mozilla’s been offering Firefox web browsers for Android for years, but the organization is working on a complete re-write of its browser that uses the new GeckoView library.

While the new browser is still a work in progress, Mozilla is now making it available for anyone to try out thanks to a new Firefox Preview app that’s available from the Google Play Store. 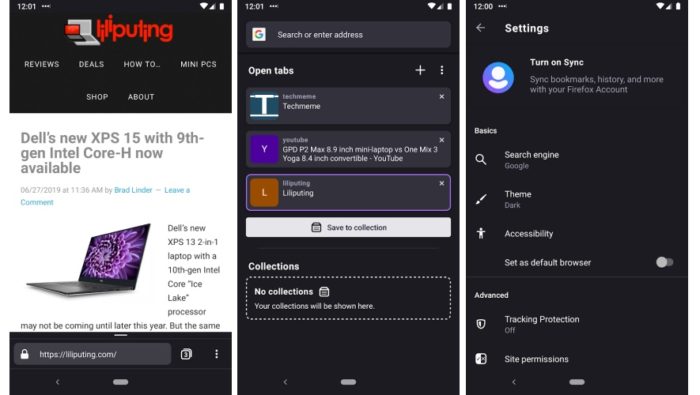 The most glaring omission is that Firefox Preview doesn’t yet support add-ons.

There are a few good reasons to use Firefox instead of Chrome on an Android device. Maybe you want to support a rival browser that prioritizes free and open source software and privacy. Maybe you’re a desktop Firefox user and you want to sync your data between your PC and mobile device. Or maybe you rely on plugins for things like password management, ad blocking, background video playback, or other functions.

So the lack of add-on support might make Firefox Preview feel a bit incomplete when compared to the official Firefox browser for Android.

That said, the preview is notably faster (Mozilla says it offers up to 2x the speed), and it does have built in tracking protection (which effectively blocks most ads on many websites… including this one — so if you do use an ad blocker when visiting Liliputing, you might want to consider other ways to support the site).

While Mozilla continues developing Firefox Preview, the organization has also announced it’s putting Firefox Focus on the back burner. The privacy-oriented browser will continue to function, but it likely won’t receive much attention from Mozilla this year.