Firefox 83 is now available for Windows, Mac, and Linux. Among other things, the latest version of the open source web browser should bring a 15-percent boost in page load performance, and an 8-percent cut in memory usage.

There’s also support for an HTTPS-only model that will alert you if you try to visit a website that doesn’t offer a secure connection.

And there’s now support for pinch-to-zoom on Windows PCs with touchscreens or touchpads, as well as Mac computers with touchpads. 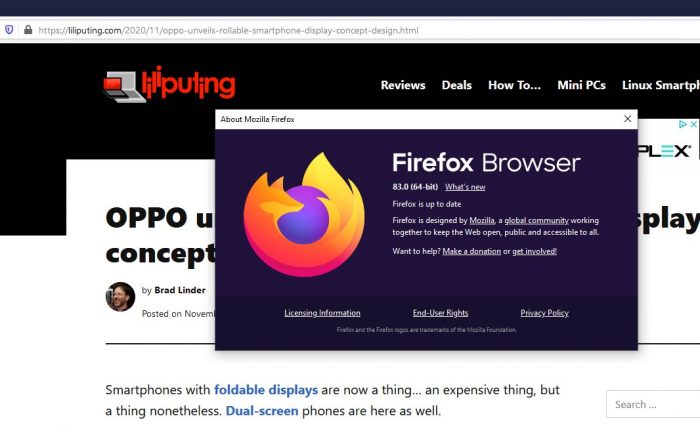 Firefox 83 also supports keyboard shortcuts for fast forward and rewind when viewing videos in picture-in-picture mode, and updates to search autocomplete and suggestions.

You can find out more about Firefox 83 in the release notes, or download the browser from Mozilla’s website (or by using the check for updates feature if you already have an earlier version of Firefox installed).

Mozilla has also revealed some details about upcoming releases: Firefox 84 will be the last version of the web browser to support Adobe Flash. When Firefox 85 is released on January 26, 2021, it will ship without support for Flash.

Adobe had already announced that it would be killing off Flash at the end of this year, and Mozilla says that starting January 12, if you do happen to visit a website with Flash content, the Firefox Flash plugin will no longer load that content.

Ending support for Flash will also allow Mozilla to begin cleaning up some legacy code in Firefox. Flash was the last NPAPI plugin supported by the browser, and now that it will no longer be supported, Mozilla will stop supporting all NPAPI plugins beginning with Firefox 85. It will likely be at least a few more releases before all of the legacy code is removed though.

One reply on “Firefox picks up HTTPS-only mode and pinch-to-zoom, will lose Adobe Flash support soon”