The first Firefox OS phones are expected to launch in Latin America in early 2013. Meanwhile, work on the operating system continues, and if some photos from TechWeek Europe are anything to go by, Firefox OS already looks a lot more robust than the last version I checked out — back when it was still called Boot To Gecko. 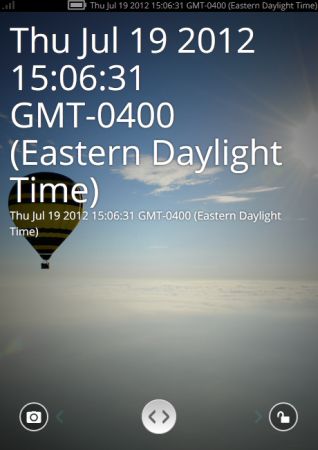 You can also check out some of the latest user interface enhancements yourself by downloading the latest zip file from the github page and opening the index.html files in the latest version of Firefox for your PC, or download the latest nightly build of full OS from the Mozilla FTP website.

At this point, the operating system has a lock screen with quick controls for unlocking the device or opening a camera app, an app launcher, contact manager, dialer, and web browser icon.

There are also notifications for text messages, missed calls, or updates from your apps, a media player, and other features you’d expect to find from a smartphone running iOS, Android, or Windows Phone.

It remains to be seen whether developers or customers will jump on the platform. HP and Palm’s webOS operating system also banked pretty heavily on web development tools, but in response to sluggish sales, HP canceled all of its webOS phones and tablets last year and started the process of transitioning webOS to an open source project.

via Neowin and The Verge