Mozilla’s Firefox OS is a smartphone and tablet operating system designed to run web apps built with HTML5. But apps come in all sorts of shapes and sizes… and the folks at Sony want to bring support for home screen widgets to Firefox OS.

The move would let you install apps that you can interact with from the home screen, such as apps that would display news or weather updates. Sony calls these “widget-like” items “gadgets” and the company has submitted code to the Firefox OS developer community for consideration. 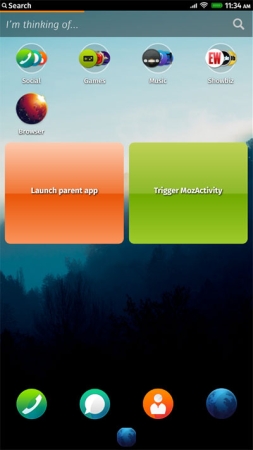 While Mozilla spearheads development of Firefox OS, it’s an open source operating system which allows anyone with a good idea to submit it for consideration.

Sony has yet to actually announce any phones or tablets that will ship with Firefox OS, although the company has been testing Firefox OS on its existing devices such as the Sony Xperia E since last year.

Gadget would work a lot like widgets in Google Android. Users would be able to long-press the home screen to bring up a menu that would allow them to select a gadget. You could also add gadgets to the lock screen. Gadgets could be moved or resized with on-screen taps and swipes.

You could interact with content in the gadget without launching the full app, or tapping it could bring up the app.