Mozilla Firefox is an open source web browser that’s had an increasing focus on privacy over the past few years. In 2021 Mozilla added a feature called Total Cookie Protection designed to prevent cookies deposited by one website from continuing to track your behavior as you visit other sites. At the time, the feature was optional and needed to be turned on by users.

Now Mozilla says it’s enabling Total Cookie Protection by default for all Firefox users (or at least everyone using the desktop version of the browser). 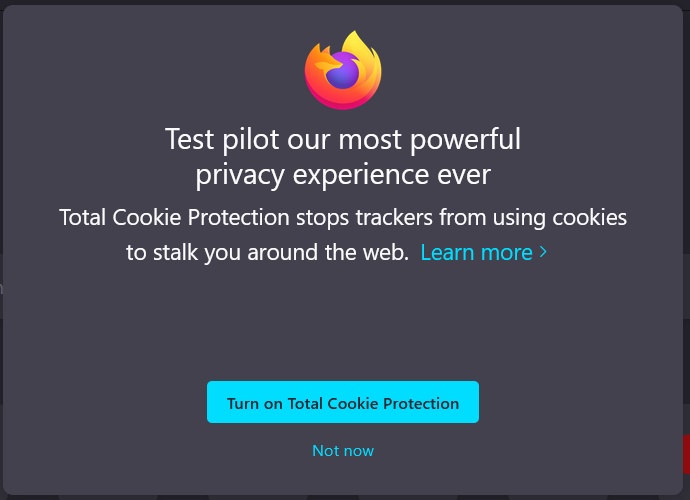 In a nutshell that means that if a website deposits a cookie in your browsing for advertising, analytics, or other purposes, that cookie will now basically be stored in a jar that only applies to that website. This will prevent Facebook, Google, or other companies from tracking you as you surf the web and make it tougher for them to build profile of your behavior.

This doesn’t mean there’s no tracking, and Total Cookie Protection isn’t an ad blocker. Websites can still deposit cookies and collect data. It’s just that by default Firefox isolates cookies on a per-site basis, which means that next time you search for a new pair of shoes in Firefox, you might be spared from seeing ads for shoes for the next three months on every site you visit.

Mozilla also plans to enable Total Cookie Protection by default for Firefox users with Android devices in the future, but the company doesn’t have a clear path for enabling the feature in Firefox for iOS, since Apple requires all third-party iOS browsers to be based on the same WebKit engine as Apple’s Safari browser.

Meanwhile Google has announced plans to phase out support for 3rd-party cookies in its Chrome web browser in the coming years, but the company, which makes most of its money through advertising, plans to hold off on doing that until it’s established a suitable alternative… something the company has struggled to do so far.