Mozilla’s Firefox web browser is already available for Android. Soon you may be able to replace your home screen with Mozilla software as well. Mozilla and EverythingMe are working on a new app called Firefox Launcher. 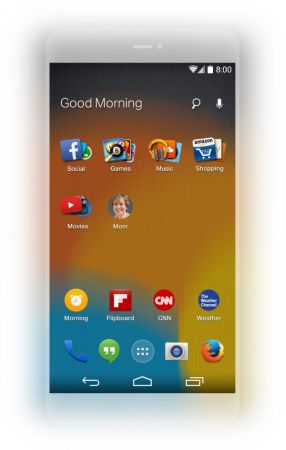 Like EverythingMe’s existing home screen app, Firefox Launcher is a contextual app launcher. That means instead of showing you the same apps every time you visit the home screen it will offer different views depending on the time of day or other factors.

For instance, if you regularly check you calendar, weather forecast, and Facebook in the morning, those might be the apps you see on your home screen when you sit down for breakfast. Later in the day you might see email, music or video apps.

There’s also a search bar at the top of the launcher. Type a query and relevant apps will pop up including apps installed on your device, apps that the launcher suggests you might want to download, and web results.

It’s that last part that makes a contextual app launcher a good fit for Mozilla’s strategy. It means that your home screen won’t just feature shortcuts to apps on your phone — it could also include links to websites that you can open using the Firefox web browser.

This isn’t Mozilla’s only play for the mobile space. There’s also the Firefox OS mobile operating system. But only a handful of phones run Firefox OS at the moment while Android pretty much dominates the smartphone space. So it’s not surprising to see Mozilla continuing to focus on Android software as well as its own operating system.

On the other hand, I kind of like knowing exactly which apps are on my home screen at a given time. Sure, it can be a pain to configure your launcher jut the way you want it, but once it’s set up you probably don’t need to change things very often. Using a context-based launcher like EverythingMe means that you may see apps you’d forgotten about or didn’t know about on a regular basis… but you might not always see the apps you’re looking for right away.