Like most modern web browsers, Firefox is effectively a video player that you can use to stream content from YouTube, Netflix, or hundreds of other sites. Last year Firefox added a picture-in-picture mode that lets you pop the video player out into its own window that remains on the screen even if you switch browser tabs or windows or open other applications altogether.

Now Firefox is building on that by letting you open multiple picture in picture windows at once so you can monitor more than one video at a time.

The feature is built into Firefox 86, which was released this week. 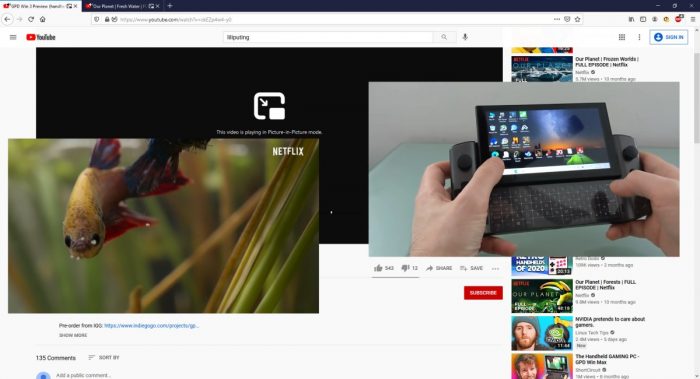 Among other things, this feature could come in handy if you’re keeping an eye on multiple sporting events at once, want to stream music videos while watching news or instructional videos, or… whatever reason you could think of where you might want to have multiple videos on screen at once.

Note that the new video will be on top of the previous one, but you can drag and drop your videos to arrange them on the screen.

Keep in mind that you’ll need to leave a browser tab open for each video you’re playing, and there are no video playback controls in the picture-in-picture windows. If you want to see the timeline, enable closed captions, or perform other tasks, you’ll have to go back to the browser tab.

But you can also use keyboard shortcuts to pause or play videos, adjust volume, skip ahead or back, or move to the beginning or end of a video.

Firefox isn’t the only browser to support picture-in-picture video playback – Google Chrome has had PiP support since version 70 was released in 2018. But Chrome doesn’t have multi-video PiP support… at least not yet.

Other new features in Firefox 86 include:

You can find more details in the Firefox 86 release notes.