Mozilla has released Firefox 60 and the latest version of the web browser includes a number of new features for personal, business, and mobile users.

The biggest changes may be in the enterprise version of Firefox, which now allows IT administrators to customize the browser configurations for employees using Windows Group Policy by blocking websites, blocking users from accessing config, addon, or profile settings, or resticting access to other features for security or productivity purposes.

Firefox 60 is also the first ESR (Extended Support Release) version since Firefox 52. So it brings more than a year’s worth of new features (and restrictions).

There are also some changes for personal users… including “sponsored stories” in the new tab page. 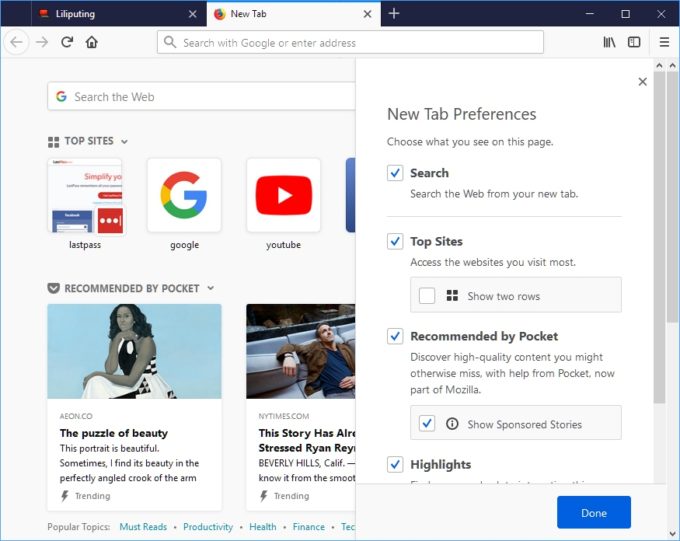 As expected, Sponsored Stories show up in the “Recommended by Pocket” section, and Mozilla says they’ll only be shown “occasionally” to users in the US for now. You can also opt out by opening a new tab, clicking the gear icon in the upper right corner, and then unchecking the box that says “Show Sponsored Stories.”

This is Mozilla’s latest effort to find a new source of revenue. It’s not the first time the company has tried putting ads in the new tab page, and it’s probably too soon to tell how the new version will be received.

Firefox 60 also brings a responsive layout to the Ne Tab page to show more content on widescreen displays and support for the WebAuthn (Web Authentication) API, making it easier for users to login to sites using multi-factor authentication with devices like a YubiKey.

Mozilla is also releasing Firefox 60 for Android, with support for the new Stylo CSS engine, which should speed up page rendering on mobile devices that have multiple CPU cores.