Mozilla changed the way the Firefox web browser works with the release of Firefox 57 Quantum a few months ago, by using separate processes to speed up web page loading and bring more stability to the browser.

Now the company has released Firefox 58, and this time the company is promising smoother graphics, faster page load times, and improved support for progressive web apps on Android devices.

But the biggest speed gains come if you enable “tracking protection,” a feature that Mozilla says prevents websites from tracking visitors… but which effectively works like an ad blocker, since that’s what most online ads do these days. 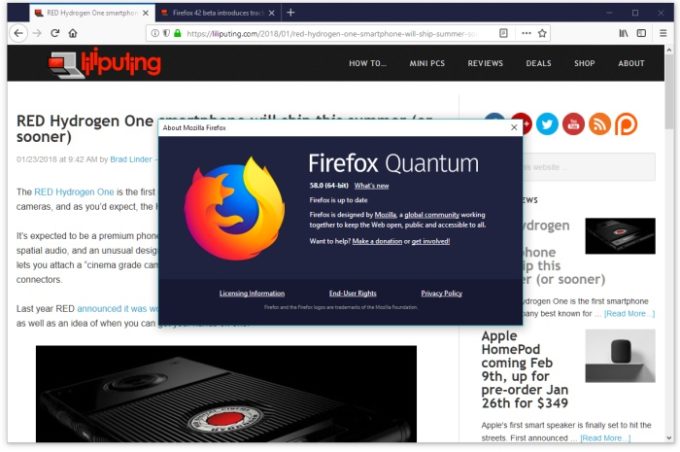 Tracking Protection first made its debut in Mozilla’s InPrivate browsing mode in Firefox 42. But since Firefox 57 was released, you’ve been able to opt into tracking protection for all web sites, whether you’re browsing in private mode or not.

Mozilla notes that while the feature is designed to protect your privacy, it can also make some websites load as much as twice as quickly. Of course, installing an ad blocker in Chrome, Edge, or another browser will also speed up page load times, but Firefox is one of only a handful of browsers that has such a featured baked in (others include Opera and Brave).

Other changes in Firefox 58 includes support for using a dedicated CPU thread to “paint” on-screen graphics more quickly, an updated bookmark manager in Firefox for Android, and support for adding progressive web apps to your phone’s home screen with a simple tap of a button (so that those apps function almost as if they were native apps).

The browser also throttles the timers in background tabs to help reduce overall CPU usage (with exceptions for tabs that you’re using to do things like play audio or engage in real-time voice or video calls).

Mozilla is also working on bringing its new WebRender page renderer to future versions of Firefox, which could speed up page load times eve more.

Firefox 58 is available for Windows, Mac, Linux, and Android.