Mozilla’s Firefox 55 web browser launches on August 8th, and it’s the first stable built to offer full support for WebVR to all 64-bit Windows users… who want to use a web browser to experience virtual reality.

For the rest of us, there might be a better reason to get excited about Firefox 55: it should bring major improvements to page/tab load times, while also reducing memory usage. 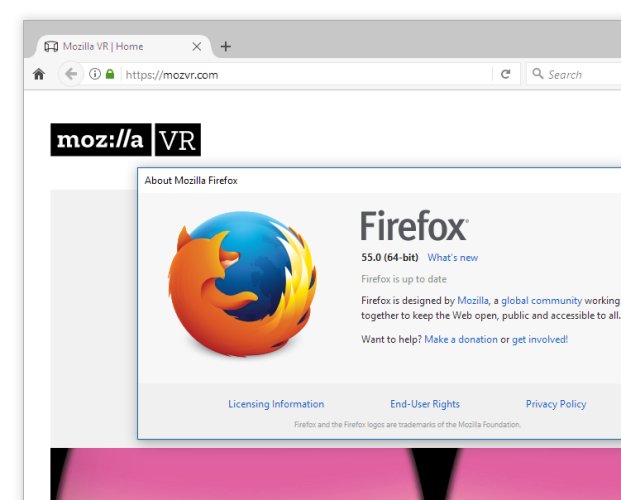 When using Firefox 51, it took nearly 8 minutes for the browser to start up with all of those tabs loaded. Things got a bit better with Firefox versions 52 through 54… but with Firefox 55 the start time is down to 15 seconds.

Note that he’s only measuring the browser startup time, not how long it takes to actually load the content of all those pages, which would be a measure of internet connection speed as much as of browser performance.

Memory usage also shrunk from more than 2GB to less than 500MB when loading those tabs (without any actual content) between Firefox 52 and Firefox 55.

As for the new WebVR feature, it’s compatible with Oculus Rift and HTC Vive headsets, allowing developers to create VR apps for the web. And since WebVR is an open specification, it also works with Chrome for Android or Windows or the Samsung Internet Browser for Samsung’s Gear VR headsets.

Firefox 55 also loads Adobe Flash content as click-to-play by default, which makes sense as the Flash countdown to extinction proceeds. The beginnings of a next-gen Theme engine are included.

And as Mozilla continues down the road to Firefox 57, which will end compatibility with legacy browser add-ons, the organization has made some updates that could lead to some of those add-ons no longer working (unless they’re updated by developers). Eventually Firefox will only support the newer WebExtensions style of add-on.