One of the things that makes Mozilla’s Firefox browser so powerful is its support for third-party add-ons and extensions that can change the look or behavior of the browser. But some extensions could also pose risks or hijack your browser.

Earlier this year Mozilla announced plans to phase out support for unsigned extensions. Among other things, the move is designed to prevent extensions that you never meant to install from taking over your browser. And now we’re getting closer to the implementation of that plan.

The latest version of Firefox (version 40) will now show a warning when you attempt to install an unsigned browser extensions. Firefox 42 won’t let you install unsigned extensions at all. 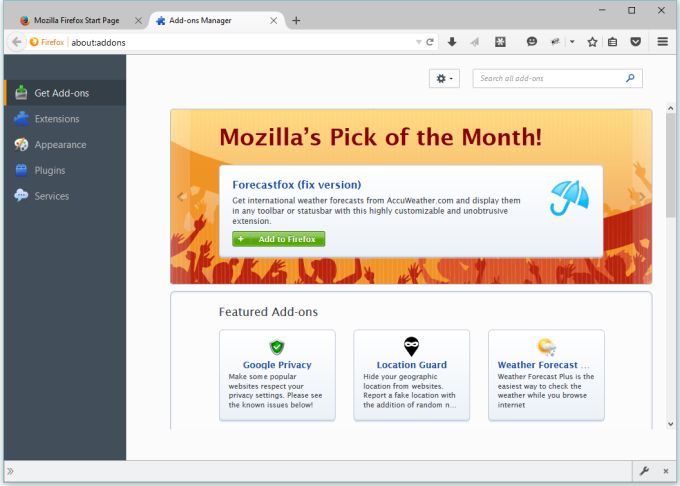 Firefox 42 is currently available as an “aurora” pre-release build. When the beta launches on September 21st, it will no longer support unsigned extensions.

Firefox 42 is scheduled for a full release on November 3rd. That’s when it will roll out to all users.

Generally speaking, the move is designed to help keep Firefox users safe from unwanted browser extensions that install themselves in order to make money through affiliate links, redirect website requests to alternate pages, or spy on users.

But the updated behavior could also have unintended consequences. While Mozilla will review and sign extensions submitted to addons.mozilla.org, some developers might want to distribute their add-ons through different channels, and older extensions may no longer be supported even if they’re safe.

Mozilla isn’t the only company to make this kind of move though: Google no longer allows installation of Chrome browser extensions from outside of the Play Store. But at least Chrome offers exceptions for developers and enterprise users.

via Mozilla and Hacker News