And it’s at the heart of the new Firefly ITX-3588J mini-ITX board that was unveiled earlier this month as a platform for building your own desktop computer or edge computing platform for AI tasks. The ITX-3588J is now available from Firefly for $489. 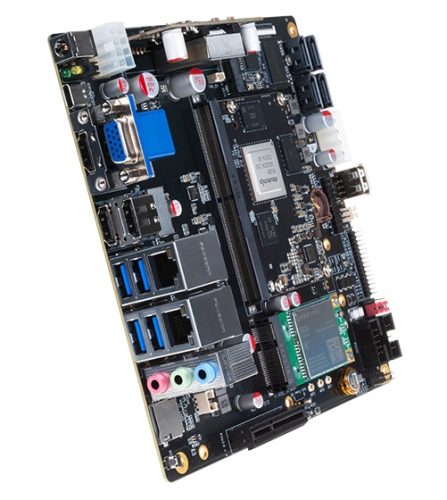 Firefly’s mini-ITX board joins a handful of other devices powered by Rockchip’s RK3588 processor, including the $129 ROCK5 single-board computer and Banana Pi’s new RK3588 compute module.

While the Firefly ITX-3588J is a pricier option, it’s also substantially more versatile. It’s a 170 x 170mm (6.7″ x 6.7″) computer motherboard with 4GB of RAM and 32GB of storage baked in, plus a lot of ports and connectivity options, as listed below. It’s also a combination of a carrier board and a smaller, removable board that’s attached via a SODIMM-style connector.

The smaller Firefly Core-3588J board, which sells separately for $229 and up, is actually the brains of the operation, housing the processor, memory, and storage. But since it’s removable, that means the processor module could be upgradeable or replaceable. Right now there’s no way to buy a module with a faster processor, but you can pay $309 for a version with 8GB of RAM and 64GB of storage.

Firefly says the board supports Android 12 and Linux distributions including Ubuntu, Debian, and Buildroot.

via Tom’s Hardware and CNX-Software