Amazon’s Fire tablets are some of the cheapest tablets worth buying, with starting prices as low as $50 (or even lower during Amazon’s Black Friday, Cyber Monday, and Prime Day sales). But they ship with a modified version of Android called FireOS that lacks some of the features you might find on other Android tablets.

So folks have been finding ways to hack Fire tablets for almost as long as Amazon has been selling them. And one of the most popular ways to do that is with a free third-party utility called Fire Toolbox. This month developer Datastream33 released Fire Toolbox version 30, bringing a handful of new features and other improvements. It also makes it a little easier to modify Amazon’s 12th-gen Fire 7 and Fire HD 8 tablets, which ship with Fire OS 8.

Fire Toolbox is a free Windows utility. Download and install the latest version from the xda-developers forum on a Windows PC, connect your Fire tablet to your computer with a USB cable, and run Toolbox and you’ll see a whole bunch of tools for customizing your tablet by installing apps, changing system settings, and backing up your device, among other things.

It also has a Google Services section that allows you to install the Google Play Store and other Google services on Amazon’s tablets. That’s something folks have been doing with Amazon’s tablets for years.

But the methods for installing the Play Store that worked on Amazon tablets released in 2021 or earlier don’t work with the company’s latest tablets. So if you have a 2021 Fire HD 10 tablet, you can use Fire Toolbox to install Google services. If you have a 2022 Fire HD 8, you cannot.

So Datastream33 added a new option to version 30 of the utility. Now when Fire Toolbox detects a tablet running Fire OS 8, clicking the Google Services button will give you the option to install the Aurora Store instead of the Google Play Store.

Aurora Store is a free and open source alternative to the Google Play Store. It allows you to search for apps in the Play Store, download and install them, and even install updates for existing apps. But you can do that either by signing in with a Google account or using an anonymous account.

Unfortunately, the Aurora Store cannot install the Google Play Services Framework. And that means that some apps, like Gmail, Chrome, and YouTube, still cannot be installed on an Amazon Fire tablet. But the Aurora Store certainly simplifies the task of finding and installing apps that aren’t available in Amazon’s Appstore on Fire OS 8 devices.

One thing to keep in mind is that before using Fire Toolbox, you’ll need to enable developer options and USB debugging on your tablet (find instructions at the bottom of this article). And before installing the Google Play Store or Aurora Store, you’ll need to enable support for sideloading apps from unknown sources.

Another thing to keep in mind is that if all you want to do is load the Aurora Store on a Fire tablet, you don’t need Fire Toolbox to do it. Just enable developer options, USB debugging, and apps from unknown sources, and you can download and install the Aurora Store directly from auroraoss.com.

Or… if you don’t want to jump through all those hoops, you might want to spend your money on a slightly pricier tablet like the Samsung Galaxy Tab A7 Lite. It comes with the Google Play Store and other Google apps and services pre-installed. No hacking required, and any apps you’ve already purchased from your Google account should be available immediately.

While that’s probably the most important chance in Fire Toolbox v30 for anyone with one of Amazon’s newest tablets, there are a couple of other changes worth noting. 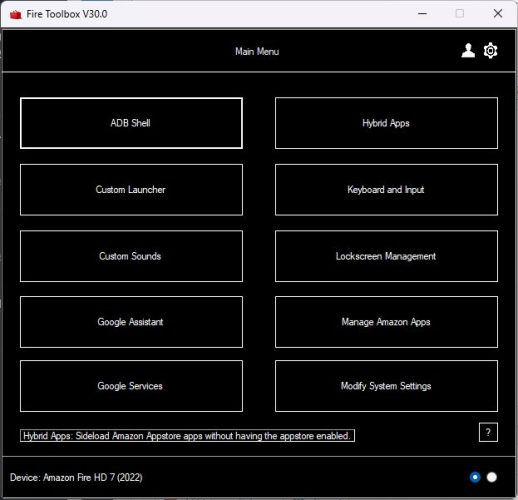 One is that there’s a new method for blocking over the air updates. Folks who hack their tablets and want to make sure Amazon doesn’t revert those changes through a software update might want to give it a try… although I’m always wary of recommending anyone use a tool that specifically blocks their devices from receiving important security updates.

Another change is support for using aliases in the ADB Shell tool. In a nutshell, if you find yourself typing a command regularly, you can now assign it an alias to save yourself some time next time you need to run it. You can find details about how that works in the Fire Toolbox v30 release announcement.

Dastream33 has also made changes to the Fire Toolbox automatic update and notification tools, and offered a new option that allows you to quickly open VPN settings on a Fire tablet.

How to enable developer options and USB debugging on Fire tablets

More on how to use Fire Toolbox