Amazon’s 2017 tablet lineup includes a new and improved $50 Fire Tablet with a 7 inch screen, and an updated $80 Fire HD 8 tablet that has a higher-resolution display, more memory, and more storage than the 7 inch tablet.

While hackers haven’t found a way to root either device or install custom ROMs yet, we’ve already noted that you can install the Google Play Store and other Google apps, hijack the home screen, and even uninstall Amazon’s pre-loaded apps and services (sort of).

Doing that requires connecting your tablet to a computer and running a series of commands in a terminal/command prompt window. But now there’s a tool that automates the process, making it easier to hack Amazon’s 2017 tablets… for better or worse. 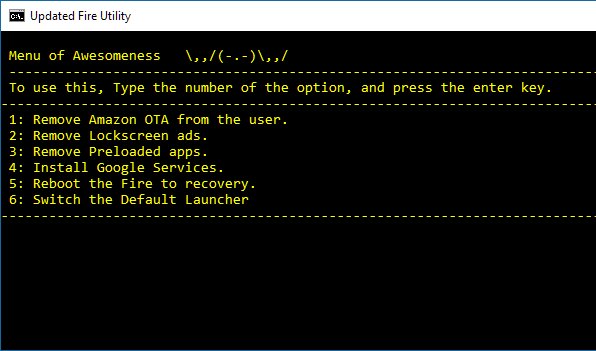 It’s called the Amazon Fire Utility, and basically it’s a simple application that lets you choose from the hacks mentioned above, plus a few others.

The utility is Windows-only, and there’s a chance you may need to use Root Junky’s Super Tool (or a similar tool) to install Amazon drivers before the Fire Utility, (formerly know as the Amazon Fire Tablet Tool), will work. But once that’s done, you can plug in your tablet, run the latest available *.bat file, and then choose from options that let you do things like remove Amazon over-the-air updates (OTA), remove lockscreen adds, remove pre-installed Amazon apps, install Google Play services, change the default app launcher, and reboot the tablet.

There are a few things to keep in mind before you get started. First, it’s unclear if the remove OTA option will actually prevent Amazon’s latest tablets from downloading over-the-air updates from Amazon that may undo some of your changes. We’ll probably have to wait to see if the tablets hacked with this tool survive the first major OTA update before we know for sure.

If you’re using an older Fire tablet running Android 5.3.1 or earlier, the OTA blocker should work though.

Second, removing Amazon bloatware removes a lot of things… including Amazon’s Kindle, music, email, contacts, photos, and even appstore apps. If you’d rather choose just those apps you want to remove on a one-by-one basis, you should probably just refer to our earlier guide (or you could open the Fire Tool.bat file in a text editor and remove the commands for uninstalling any individual apps you want to keep).

Third, installing Google services also installs Google Photos, with the assumption that if you’ve uninstall the Amazon Photos app you may want a replacement. The Google app is also installed, so that if you use the Nova launcher app you can conduct Google searches from the search bar.

Fourth, it’s worth noting that none of these changes are irreversible — because you’re only removing the apps from the primary user’s account. They’re still in the system directory on your tablet. While the Fire Tool doesn’t provide a simple method for restoring apps one-by-one, you can reboot to recovery if you want to perform a factory reset, which will reinstall all of the default apps (and wipe your user data from the tablet).

So while you’ll probably want to proceed with caution when using this tool, it’s nice to know that you can always perform a factory reset if anything goes wrong. Just make sure to back up any important files or data before you get started.

One more thing to keep in mind — this article is up-to-date as of  July 31st, 2017, which is just a few days after the Fire Tool was released. The developer may make changes to the menu items, the list of apps that are installed and uninstalled at each step, or other features in the future. So make sure to read the notes at the Fire Utility thread at the xda-developers forum for the latest information on the tool before using it.