A lot of people seem to find fidgeting with pens, remote controls, and other gizmos with buttons, knobs and dials helps keep them calm and/or focused. But you might not always have a suitable plaything nearby.

The Fidget Cube is a new crowdfunded product that’s basically a tiny vinyl box with instruments designed for fidgeting on each side of the cube.

It’s kind of useless, since the buttons don’t actually do anything. But it’s also kind of ingenious, since the point isn’t to turn your TV on and off, but to give your fingers something to do.

And maybe that explains why backers of the Fidget Cube Kickstarter campaign have already pledged over $4 million for a project that started off with a modest goal of raising just $15,000. 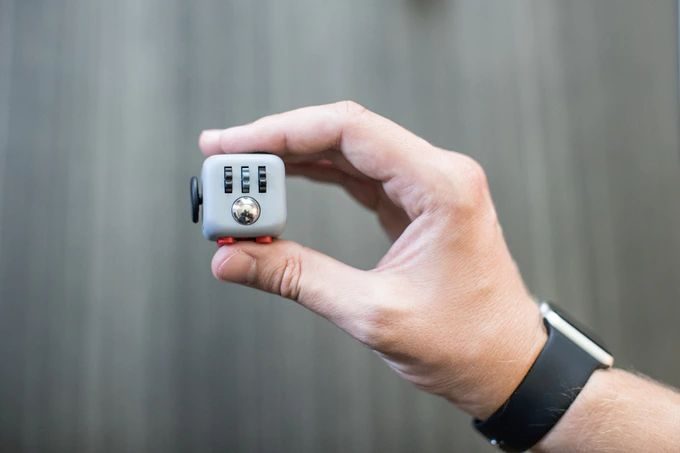 It probably doesn’t hurt that the Fidget Cube is also pretty cheap. The eventual retail price is expected to be $25, but Kickstarter backers can reserve one for $19.

You can also save by purchasing more than one. Pledge levels include:

You might not think you’d need 80, but several dozen backers have chosen that pledge level, presumably to outfit an office space, classroom, or other setting where you’ve got a lot of people with fidgety hands.

Here’s what you’ll find on each of the cube’s 6 sides:

The folks behind the Fidget Cube hope to begin shipping items to backers of the Kickstarter campaign in December.