Feedly has released a major update to its Android app, promising the feed reader will load up to 3 times as quickly, offer more fluid scrolling, and a new user interface. If you’re paying for Feedly Pro you can also now search your feeds using the mobile app.

The Feedly app is available as a free download from the Google Play Store. 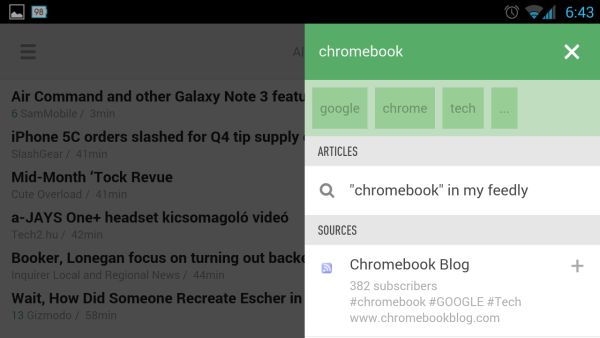 Since Google Reader shut down earlier this year, a number of companies have rushed to offer their own cloud-based RSS readers or to beef up existing apps. Feedly has been ahead of the pack for much of that time, moving from a service built on top of Google Reader to one which hosts your data and keeps your list of feeds and read and saved items across different devices.

Feedly also offers an API which lets other developers use the service as a back end for their own online RSS readers.

Starting with Feedly 17, the Android app has a new user interface with new fonts, icons and graphics, a new discover section, and a new widget. It’s also designed to work with a Samsung Galaxy Gear smartwatch.

If you’re still not sold on Feedly’s official widget though, the Play Store is choc full of other apps which use Feedly to sync your data, but which provide an alternate way to keep up on the latest news from your favorite websites.