With a few weeks to spare, Feedly is severing its ties to Google Reader. Google is killing its RSS reader on July 1st, and a number of companies are trying to offer new homes to folks who have been relying on Google Reader for years.

Moderately unscientific polls like one running this week at Hacker News this week tend to suggest that Feedly is one of the most popular Google Reader alternatives, and the company says it picked up 3 million new users shortly after Google announced it was discontinuing its feed reader. Now the company says it’s up to 12 million users, total.

There’s just one problem: up until recently, Feedly had actually relied on Google Reader to synchronize your feeds and other data across devices. Over the past few months Feedly has been working hard to build its own infrastructure, and now the transition is nearly complete. 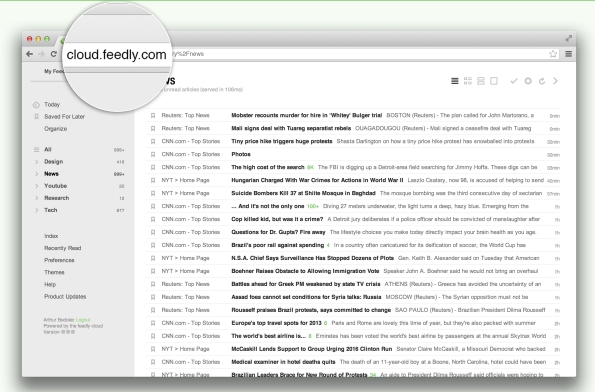 The new Feedly Cloud service basically picks up where Google is leaving off. It allows Feedly to store your list of feeds online, and synchronize your read, unread, and saved items across devices.

Now that Feedly is hosting this data on its own servers, it can also offer something new (for Feedly anyway): the ability to use the news reader in a web browser without installing an extension or plugin.

Up until now if you’ve wanted to use Feedly in Chrome, Firefox, or Safari, you’ve had to install a browser add-on. Now you can use it in pretty much any modern web browser just by visiting feedly.com.

If you do that by July 1st, you’ll be able to import your Google Reader data to migrate to Feedly automatically.

Android and iOS apps are also available for mobile devices.

Feedly is also making its infrastructure available to third party app developers looking for a way to sync data across devices without building out their own cloud services. Press, gNewsReader, Newsify, and others are already partnering with Feedly.

While Feedly isn’t the only game in town, it currently offers the most Google Reader-like service for folks that want to be able to read their feeds in a web browser and using a mobile app. Some features, such as searching within your feeds, are still works in progress though — and may only be available to paid subscribers once they launch.

Digg Reader is expected to offer a similar experience when it launches next week.