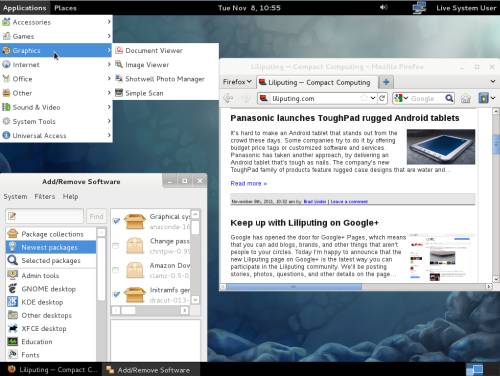 The update also moves from the GRUB boot manager to GRUB 2, updates tot he latest Linux kernel, and features other changes under the hood. There’s also a new Julles Verne, underwater-inspired desktop theme.

If those updates dont’ sound all that exciting, that’s because Fedora updates come every six months or so and often aren’t as dramatic as major updates to Windows or OS X. But the latest version of Fedora is a solid operating system designed to run on a wide range of computers.

Its minimum system requirements include a 400 MHz Pentium Pro processor, 768MB of RAM, and 10GB of disk space. Clearly you’ll have better results with a more powerful system, but you can actually run Fedora 16 in text-only mode (without a graphical user interface) on a computer with a 200 MHz Pentium Pro chip.

The disc image is 605MB and you can burn it to a bootable LiveCD so that you can boot from the disc and try out the operating system on your computer before deciding whether to install it on your system. You can also create a liveUSB disc image if you want to test or install Fedora on a computer that doesn’t have an optical disc drive.