FAVI Entertainment is the latest company preparing to launch a USB stick-sized device that you can plug into a TV in order to run Android apps on a big screen. I’m starting to think there are as many different Android TV sticks as there are potential customers for these products at this point… soon everyone will be able to get their own custom model! 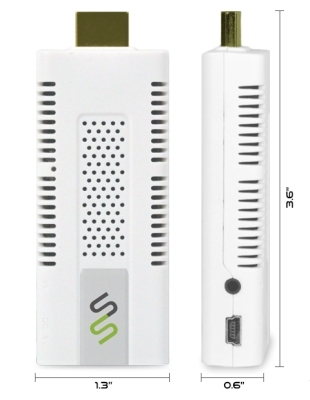 Anyway, there are at least three things that make the FAVI Smart Stick interesting.

You connect it to a TV by plugging the stick right into an HDMI port. It can support 720p or 1080p output. It draws power either from a USB port or an AC adapter. There’s also a port where you can plug in an IR receiver for use with a remote control.

The demo video shows popular apps such as Netflix, Hulu Plus, and MLB. The device also appears to work with the Google Play Store, which should make downloading additional apps easy.

Unfortunately the company isn’t saying anything about the processor under the hood, so it’s tough to say how the Smart Stick compares with other devices already on the market such as the MK802, UG802, CX-01, or G-Box Dyno.