The Surface Duo was an intriguing device, but it wasn’t without its shortcomings. At its Surface event today, Microsoft was ready to show off how it addressed them in the Surface Duo 2. Perhaps the biggest knock on the Surface Duo was its underwhelming cameras. This time around Microsoft opted for a more premium triple-lens setup: a 12MP, f/1.7 wide angle, 12MP and f/2.4 telephoto (both with OIS) and a 16MP, f/2.2 110o ultra-wide  with distortion correction. Video can be recorded in HDR and at resolutions up to 4K at 30 or 60FPS. There’s even a front-facing 12MP camera this time around for selfies and video calls. 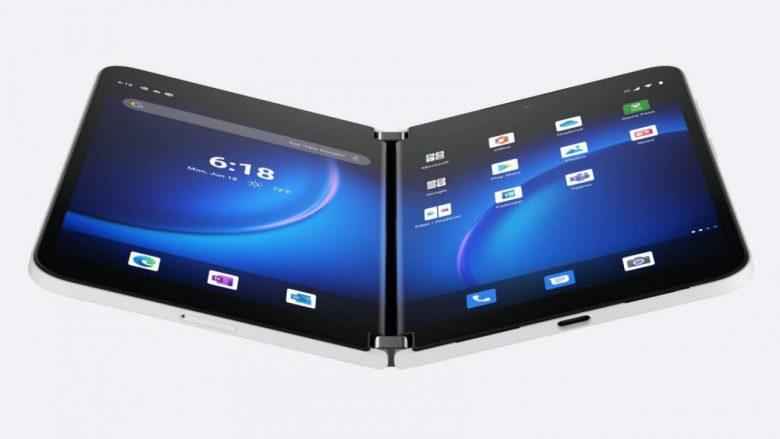 The Surface Duo 2 is equipped with larger displays, too. A pair of 5.8-inch, 1344×1892 pixel AMOLED screens fold open to form an 8.3-inch combined display. It’s a modest .2 inch bigger than the original, but size doesn’t tell the whole story. The displays can also refresh at up to 90Hz and they’re protected by Gorilla Glass Victus, which is rated to survive drops onto hard surfaces from 2 meters.

Performance gets an overall boost from the Qualcomm Snapdragon 888 processor — which also brings both mmWave and Sub-6 GHz 5G connectivity. It’s paired up with 8GB in the Surface Duo 2, a nice bump from the original’s 6GB. In addition to 128 and 256GB models Microsoft is offering a 512GB Duo this time around.

But the most intriguing tweak to the Surface Duo 2 might just be the Glance Bar. It’s nestled along the device’s Revolutionary Hinge and displays the time and notification icons when the device is folded shut. That’s it above showing a missed call, text and Teams activity.

The Surface Duo 2 is slightly thicker, measuring 11mm when closed and (logically enough) 5.5mm when opened. It’s slightly heavier, too, at 10 ounces compared to the original’s 8.8.

Microsoft has scheduled the official release is for October 20th, but if you want to secure a Surface Duo 2 right now you can head over to the Microsoft Store online and place a pre-order. Prices start at $1499 for the 8GB/128GB model. Doubling internal storage will cost you another $100 while maxing out at 512GB adds $300.