Fairphone has gotten a fair amount of attention for releasing a phone with a modular design (making it easy to replace or upgrade some components) and which is partially built from ethically-sourced materials. But the Dutch startup has a wider view of what makes a phone “fair,” and that also includes allowing users to choose the software that runs on their device.

So the Fairphone 2 has an unlockable bootloader, making it possible to replace the operating system that comes pre-installed on the phone. And now there’s a new option for folks looking for a replacement OS: Fairphone Open Source OS. 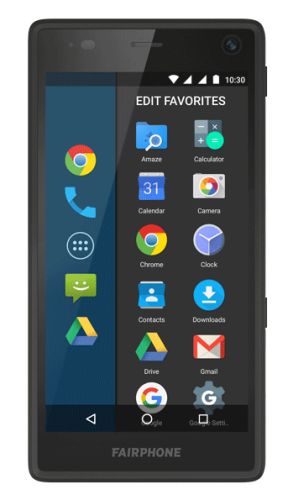 The operating system is similar to the default Fairphone 2 software. The latest version is based on Android 5.1 Lollipop and has everything you need to make calls, surf the web, and run third-party apps. It also has some Fairphone-specific features including Edge Swipe, a Recent Contacts icon on the home screen, and more.

But Fairphone Open Source OS does not have Google Mobile Services, which means it lacks the Google Play Store, Gmail, YouTube, and Google Maps, among other things. You can use third-party app stores like F-Droid, or you may be able to install GMS on your own if you want to use the open source version of Fairphone’s operating system without losing access to Google’s apps and services.

So why would you choose the open source version? Well, for one thing, Fairphone provides an easy option for rooting this version of its operating system. For another, with the exception of some binary blobs required to allow the hardware to work, the source code is all available for inspection, making it easier for technically advanced users to understand what’s going on in their phones or modify the software.

The installation process looks pretty simple. You can flash Fairphone Open Source OS using fastboot, but there’s also an option to just download and run an OTA updated package to your phone and use it to start the update process. Note that this will wipe all data from your device though.

Prefer a non-Android operating system? You can also install a community build of the Linux-based Sailfish OS on a Fairphone 2.

Want to know more about Fairphone’s approach toward making phones that are… well, fair? Check out LPX Episode 5: Building a fair(er) phone.