If you’ve got a modern smartphone with a broken camera, battery, or display, odds are that you’ll need to send it to the manufacturer or a repair shop to fix what’s broken. Or you can try to do it yourself using replacement parts ordered over the internet and instructions found at sites like iFixit.

But there’s at least one new phone that’s designed to be repairable. The Fairphone 2 is a phone with ethically-sourced components and a modular design that lets you replace broken components just by sliding in a new module. You might not even need a screwdriver.

The folks at iFixit have posted a teardown guide for the Fairphone 2, and it really does seem to deliver on the promise of an easy-to-fix phone. 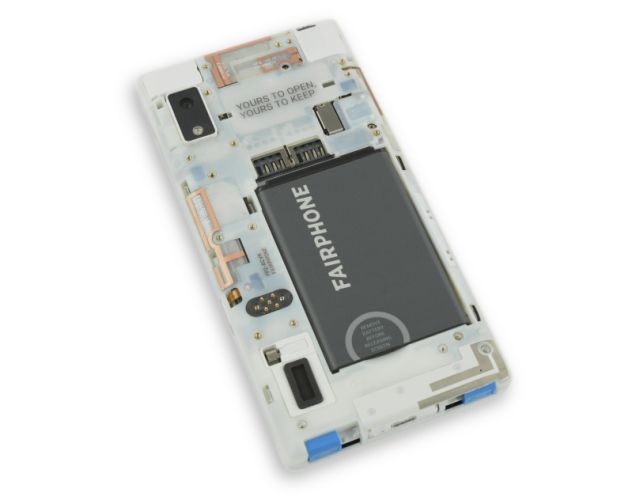 You don’t need a screwdriver to open the case, remove the battery, or even to pop off the display. Want to swap out batteries on the go? You can do that. Want to replace a cracked screen yourself? You should be able to buy a replacement module from Fairphone and do that easily.

There are a few more modules which will require a screwdriver to access. But they’re relatively easy to remove and replace, so if your speaker or camera needs to be replaced, it should be easy to do that.

The iFixit team also dissected some of the modules themselves and found that they’re basically made of off-the-shelf components stuffed into shells that attach to the motherboard. So theoretically ambitious DIY types might even be able to repair individual modules.

While it’s too soon to say whether Fairphone will ever offer upgrade modules for users that want faster processors, better cameras, or improved screens, it’s nice to know that the Fairphone 2 is at least an easy-to-fix device. In fact, iFixit gave it a repairability score 10 out of 10, which is the highest score iFixit has ever given a phone.

The phone is expected to begin shipping in December to customers who have already placed pre-orders. If you want to order one now, it should ship in January. The Fairphone 2 is priced at €529, which is a little more than $560 US at the current exchange rate.

The phone features a 5 inch, 1920 x 1080 pixel display, a Qualcomm Snapdragon 801 processor, 2GB of RAM, 32GB of storage, a microSD card slot, and Android 5.1 software. While it’s a bit pricey for a phone with those specs in 2015, ethically-sourced materials and a custom modular design don’t come cheap.