The Fairphone 2 is an Android smartphone designed for folks who want the convenience of modern technology, but don’t like the idea of spending hundreds of dollars on a gadget when it’s built by workers paid lousy wages, contributes to electronic waste, and other problems.

The phone is made from materials from conflict-free zones, and the makers of the Fairphone 2 have contributed to an e-waste recycling program in Ghana and a worker-controlled welfare fund in China.

As the name suggests, the Fairphone 2 is the second smartphone from Fairphone, and it’s now available for pre-order in Europe for €529, or about $576 US. 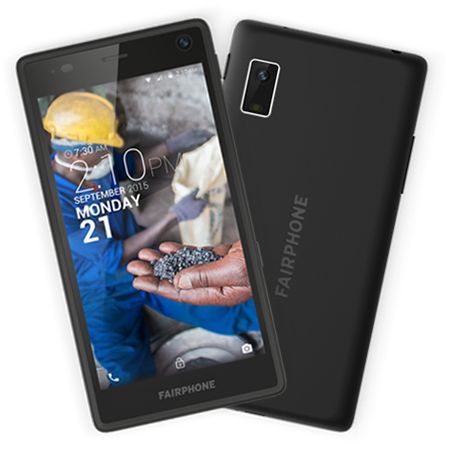 Fairphone doesn’t expect to ship the first phones until November, so you may have to wait a little while for the device to arrive.

While the new phone has better specs than the original Fairphone, the company isn’t really trying to compete with flagship phones from Samsung, HTC, or LG. So you probably don’t need to worry too much about the hardware feeling outdated by the time the phone ships… because it’s already a little dated.

The phone also has a semi-modular design. You can replace the back cover to change the color or design of the Fairphone 2. You can also replace the battery. But that’s just the tip of the iceberg.

Fairphone will also let you remove the camera, speaker, microphone, USB port, and display. This makes it easy to replace a broken screen, camera, or other hardware without throwing away the whole phone. Whether you’ll be able to upgrade those components for a more powerful camera, higher-res display, or other improvements depends on whether Fairphone raises enough money or sticks around long enough to provide updated modules.

You won’t be able to replace the phone’s core unit though, which means the Fairphone 2 will always have the same processor, memory, and antennas.

You can probably find plenty of phones in the same price range as the Fairphone 2 with better specs. But few of them offer what the Fairphone 2 does: an easy-to-fix phone made from ethically-sourced materials.