Google, Qualcomm, and companies like Samsung are working to ensure that smartphones receive operating system and security updates for longer – buy a new Samsung phone today and it should still get security updates in four years.

But a small Dutch company called Fairphone is doing a bit better than that. Kind of.

Five years after releasing the Fairphone 2, the phone is still receiving updates. The good news is that the latest update makes it the only smartphone from 2015 to receive official support for Android 9. The bad news is that Android 9 is already a few years old at this point.

But Fairphone notes that it was able to deliver the update without any help from Qualcomm, which no longer supports Android updates for the phone’s chipset, by working with the open source LineageOS Android distribution and undergoing hundreds of thousands of tests to receive certification from Google to allow the software to include Google apps and services. 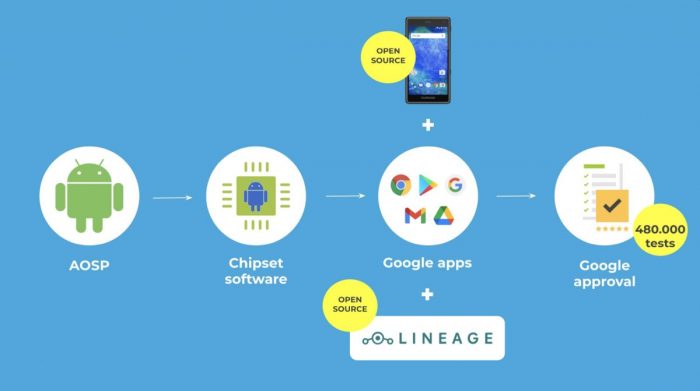 And while Android 9 may not be state of the art software in 2021, by continuing to at least some support its phones for five years or longer, Fairphone makes it a little less likely that you’ll feel the need to replace your phones as regularly. Fairphone also sells replacement parts including batteries that can come in handy if you’re planning to hang onto your phone for a long time.

Software updates and repairable, replaceable (and sometimes even upgradeable) parts can help cut down on electronic waste and reduce the amount of raw materials needed to make new phones, which is a big part of the reason Fairphone offers those things. Unlike most phone makers, Fairphone is a social enterprise business, which means the organization isn’t just focused on making a profit, but also considers the environmental and ethical impact of its products – the company also tries to use ethically-sourced materials in its phones.

Fairphone began offering an Android 9 beta last year, but now the stable build of Android 9 will begin rolling out an Android 9 update to the Fairphone 2 today, but it will be a staged rollout, so some users may not receive the update until April 18, 2021.

The Fairphone 2, if you’re curious, is powered by a Qualcomm Snapdragon 801 processor and features 2GB of RAM, 32GB of eMMC5 storage, a 2,420 mAh battery, a 12MP rear camera, 5MP front camera, and support for 4G LTE.

Fairphone originally shipped the phone in late 2015 with Android 5. An Android 6 update was released in 2017, followed by Android 7 in 2018 and now Android 9 three years later. It’s safe to say that Fairphone is delivering on its promise of offering long-term support for the phone… but users have clearly had to wait a while for the latest update

While the goal is to offer a sustainable, ethical phone, Fairphone’s impact on the overall industry is probably pretty small. The company says that all told, it shipped about 115,000 Fairphone 2 smartphones. That’s not bad for a niche device, but it’s a drop in an ocean when it comes to the overall smartphone market.

The company’s latest models are the Fairphone 3 and Fairphone 3+ which first launched in 2019 with Qualcomm Snapdragon 632 processors and Android 9 software, and which will be supported through at least August, 2024 with:

One down side to the company’s phones? They’re not available in North America.