Less than two weeks after demonstrating an exploit that allows Linux to be loaded unto a Nintendo Switch game console, fail0verflow is back with a new video showing what appears to be a full-fledged GNU/Linux-based operating system running on Nintendo’s tablet. 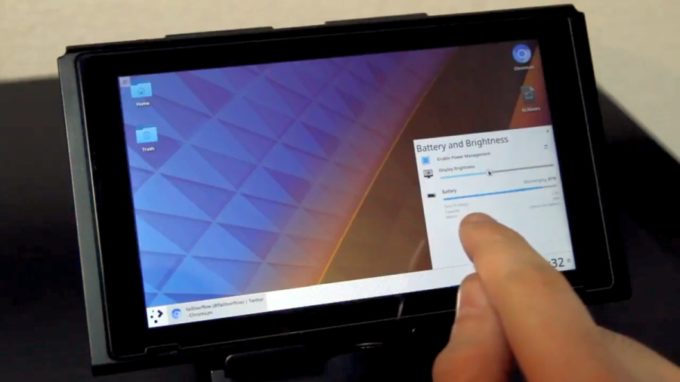 An on-screen keyboard makes it possible to enter text, and multitouch support enables features like pinch-to-zoom to work in a web browser.

Screen brightness can be adjusted, and it looks like the screen can wake from sleep with a simple touch.

Code execution is all the rage these days, but can your Switch do *this*? 😉 #switchnix pic.twitter.com/NMnBq61tOM

While fail0verflow’s video shows that it’s possible to run a touch-friendly, Linux-based operating system on the Nintendo Switch, this still isn’t something that’s easy to do at home. Nintendo doesn’t provide an easy way to load custom firmware on its latest game console, and fail0verflow hasn’t released instructions or many details about the exploit that was used to install Linux.

That said, we do know that the vulnerability exploited by this hack is said to be something that Nintendo can’t fix with a simple software update. Even if the company eventually releases new hardware that’s not vulnerable, Nintendo has sold millions of Switch consoles to date, so there may be an awful lot of (kind of) Linux-friendly Switches in the wild already.

Of course, most people interested in picking up the $399 game console are probably most interested in using it to play games developed for the Switch. There are substantially cheaper options if you want a general-purpose tablet.

But it’s still always fun to see hardware run software it was never designed to run.