Facebook recently added a camera feature to all of its mobile apps, allowing you to quickly snap a photo or capture a video and share it with your friends… but also to apply real-time effects including frames, virtual masks, and style transfers (make your picture look like a van Gogh in real-time).

Now Facebook says it’s opening a platform so developers can build third-party apps that use the camera. And in that way, Facebook CEO Mark Zuckerberg says the company is “making the camera the first augmented reality platform,” rather than glasses or headsets. 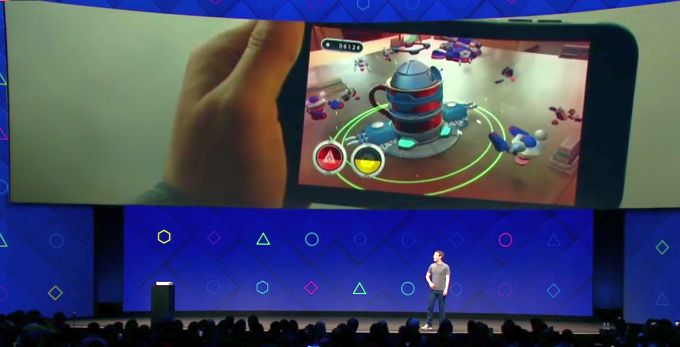 Of course, this is nothing new: some of Facebook’s existing features seem to have been inspired by Snapchat. And developers have been using smartphone cameras to overlay virtual items on real-world experiences for years.

But advances in software and hardware are starting to make it possible for augmented reality to get good.

Facebook is launching a beta of its new developer tools today.

Some examples Facebook showed off during a keynote for the F8 developer conference include:

Facebook is also showing off some new features designed for VR, which isn’t surprising since the social networking company also owns Oculus, the company that makes the Oculus Rift VR headset and which partners with Samsung on the Gear VR platform.

One of the most interesting new VR experiences is called Spaces, and it’s basically a virtual reality-based communication tool that lets you create a virtual space, incorporate virtual items that you can interact with, and engage with Facebook Messenger contacts by inviting them into your Space so your avatars can communicate in real-time.