If you’re a Facebook users you probably already realize the company knows a lot about you based on the things you post, the people and brands you interact with, and other things you do on the Facebook website or in a Facebook app.

The company’s come under heavy scrutiny for its privacy policies and practices recently and Facebook is scrambling to make changes to improve its image (and comply with European privacy regulations that will be enforced starting later this month). The company is expected to talk about some of those things at the Facebook F8 developer conference that gets underway today.

Ahead of his keynote presentation, CEO Mark Zuckerberg teased one upcoming feature. It’s called Clear History, and it’ll let you delete some of the data Facebook has collected… and opt out from future collection… sort of. But there’s a catch: you’ll need a Facebook account to use it. 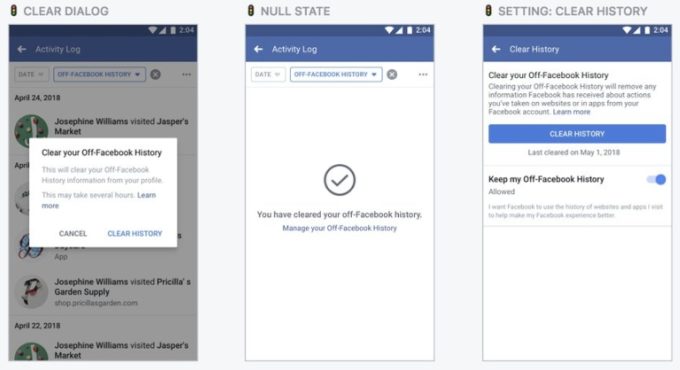 Clear History is expected to roll out in the coming months, and it’ll let users do three things:

That third one is interesting for a few reasons. First, it’s the first time Facebook has really offered users a way to opt-out of this sort of data collection. Second, it’s not really a complete opt-out. The company will still receive data as you visits websites that use Facebook Like or Analytics services. That data will just be anonymized rather than associated with your account.

Facebook says the anonymous data will continue to be useful to Facebook and third-party developers, since it can help provide demographic information (like the age, sex, or geographic location of users) without identifying specific users.

That said, if you’re part of the #DeleteFacebook movement, or you’ve always avoided the service because of its privacy practices, today’s announcement is a bit of a mixed bag. On the one hand, Facebook is giving users a bit more control over their privacy settings. On the other, you need to have a Facebook account to use it.