There’s a lot of free, ad-supported content on the internet. You can search the web, read the news, and watch cat videos for free. And even though Hulu is moving to a subscription-only service, you can still (legally) watch plenty of TV shows and movies without paying a penny.

But according to the Interactive Advertising Bureau, more than a quarter of folks surfing the web in the US are using ad-blocking software, and while plenty of people are willing to pay for some content (like Netflix or maybe the Wall Street Journal), there are a lot of people who aren’t paying for news… which has led some newsrooms to scale back operations, some popular blogs to close up shop, and other internet sites to take different approaches toward the challenge of trying to pay for the services they offer.

Still, I have to imagine Facebook’s new approach is going to annoy a lot of people. 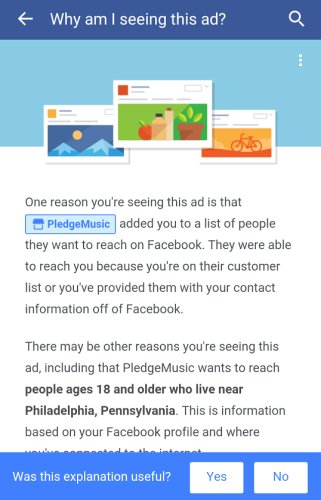 The social network has announced it will “begin showing ads on Facebook desktop for people who currently use ad blocking software.”

There’s no information about how Facebook will achieve this — and I suspect there’ll be an ongoing battle between Facebook’s developers and those who create popular ad blocking tools like uBlock and AdBlock Plus. But the idea is to recognize when users are running software intended to hide ads… and then to show ads anyway.

As The Wall Street Journal notes, unlike most web sites, Facebook loads ads onto the page itself, which could make it easier for the company to circumvent ad blockers than it would be for most rival services.

Facebook says it’s done a lot of work to figure out how to make ads better and to give users more control over the ads they see: don’t want to see ads about travel? You’ll be able to disable them. Don’t want to see ads from companies that have bought your data? Turn them off.

But based on my experience with readers of this site (and as a citizen of the internet), I know that there are plenty of people who don’t just want more relevant ads. They don’t want any ads… or if they’re willing to accept ads, they want them to be discrete and unobtrusive — you know, so they’re easy to ignore (there’s not a lot of money in ads that you don’t pay attention to though, so good luck with that).

Personally, I’ve come to peace with the fact that a large number of the tech-savvy readers of this website are going to use ad blockers. So I’ve set up an alternate way that people can help support the site. But I have no illusions that a Patreon campaign for Liliputing would ever generate enough revenue to fully support this site, so the ads aren’t going away anytime soon.

I’ll be curious to see what kind of response Facebook’s move gets, though. I mean, what are people going to do… use Google+ instead?